Editor’s Note: These whiskeys were provided to us as review samples by Redwood Empire Whiskey. This in no way, per our editorial policies, influenced the final outcome of this review. It should also be noted that by clicking the buy link towards the bottom of this review our site receives a small referral payment which helps to support, but not influence, our editorial and other costs.

I grew up in Montana. Living amongst the trees and forests, backpacking, hiking, and camping were a constant backdrop to my formative years. By the time I made it to Northern California for a quick trip through the Redwood National Forest, my memories were eclipsed by the awe and inspiration that the trees and fauna hold. To take on such an iconic setting as part of your brand sets up a tall order to fill.

Redwood Empire Whiskey’s eco-friendly distilling mission is displayed in their single distilling methods recycling of used mash to local farmers for feed as a couple of examples. With their team of passionate distillers, this brand has bucked the Sonoma wine tradition for whiskey. The results are a strong line of whiskeys that have a lot to say.

I had the opportunity to sample two of their recent offerings. What did I find while investigating these Rocket Top and Grizzly Beast batch of whiskey? Does their eco-forward approach allow for flavor to maintain top priority? 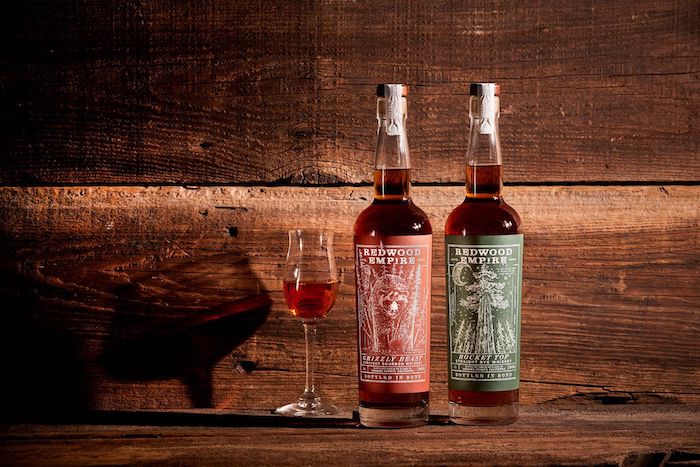 Nose: A fruity nose, with caramel, vanilla, cranberry, Maraschino cherry, and a hint of leather on the end

Palate: The first flavors to come forward were raw sugar, canned pear, and dried fruit–almost a bit of fruit cake but not as malty. Cracked pepper opens up the heat. The heat prickles hot then dissipates to a gentle hum on the lips. It has a nice buttery mouth feel. The finish is spice-forward, with a note of allspice and a welcome taste of oak on the back of the tongue.

Summary: This is a solid rye. It’s a good sipper, but it does lean a bit on the sweet side vs the oakiness that I tend to look for in a go-to rye. This is also pretty high-priced, even for a Bottled-In-Bond offering. But that does not detract from the pleasant sipping experience.

Nose: A gentle nose. There is a bit of a cinnamon bun note, lending a sweet maltiness. Not a huge hit of spice.

Palate: I was expecting a light sipper from the nose on this one. What I experienced was a soft buttery note, like a just-done soft caramel, as well as a hint of citrus. The baking spices, though not really experienced on the nose, were the boldest expression I tasted. There was cinnamon, nutmeg, and brown sugar. The heat balances well with the flavors and maintains a polite presence.

Summary: This was a very enjoyable whiskey for me. The sweet character was not overpowering. It held my attention throughout the drink and begged for a second pour.

Final Thoughts: These entries in the bottled-in-bond market are well worth a sample. I do recommend an ice cube when drinking Rocket Top, but Grizzly Beast is nice with or without.