Editor’s Note: These whiskeys were provided to us as review samples by Deutsch Family Spirits. This in no way, per our editorial policies, influenced the final outcome of this review. It should also be noted that by clicking the buy links in this article our site receives a small referral payment which helps to support, but not influence, our editorial and other costs.

Redemption Whiskey states that it has “one purpose and one purpose only: to bring rye whiskey back to its rightful place.” This is a nod to the predominance of rye whiskey in early America, where it was both the first whiskey made and the most widely enjoyed. Of course, there are different demographics to consider in order to re-earn those credentials..

The first is the drinkers, Take your average whiskey drinker. Likes whiskey, knows some, likes to try new things. And then there’s your whiskey buff. Knows a bit more, knows some background information on it, also likes to try new things. Where do they meet? At the bar. Redemption is working to find its place on the back bar, the better to reach all manner of consumer.

The second is the rye itself. The original “red” ryes of this country were made almost completely of rye, as Redemption is currently making theirs. Rye production hit a bust and subsequently fell out of favor, only to come back very suddenly in the last decade. The ryes of today, however, lean toward the sweeter, higher-corn Kentucky style.

Now these bottles, of course, are corn-dominant because they are bourbon, and subject to all of the laws and regulations regarding that. But rye is still very important in bourbon. Bourbon legally contains at least 51% corn in the mash bill, typically has a bit of malted barley to aid the fermentation process, and fills out the rest with rye or wheat.

Rye in the mash bill gives the spirit spice, a bit more bite, and makes it sharper, whereas wheat is soft and lightly sweet (Pappy Van Winkle is a famous example of a wheated bourbon). Considering the basis of the brand, Redemption is using rye to fill out its bourbon expressions.

The Barrel Proof High Rye Bourbon is closer to Redemption’s core ideal of returning to original rye practices. The higher rye percentage makes the rye a major player in the flavor profile, as opposed to simply being a balance. The Barrel Proof Bourbon is a little sweeter and closer to a more classic bourbon, though also brings the heat with its high ABV.

As for Redemption’s cocktail approach, these are a bit trickier. Barrel proof whiskies can make exceptional cocktails, but they typically need a little tinkering and are not for the faint of heart. Old fashioneds and the classic rye drink, the Manhattan, generally do well with the higher ABV, as could the classic julep and simple spirit-forward cocktails. Whiskey sours would be likely to break, but remain delicious, and citrusy drinks may not hold up to the strength of the spirit. But there’s always room for experimentation. 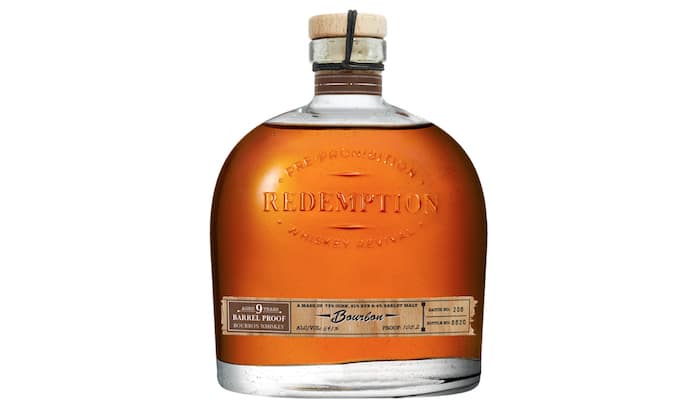 Appearance: Toffee colored with an auburn shade to it.

Nose: Strong oak and vanilla, with notes of burnt sugar.

Palate: Heavy texture, more viscous than creamy. Very warm. Grassiness leads into spiciness, but both remain present through the whole palate. Little to no sweetness present, a very savory experience.

Nose: Honeyed, but closer to the original source, like the honeycomb itself. Sweetens over time.

Palate: Strong flavors of baking spice and nuttiness at first and through the mid-palate. That strong rye note doesn’t come in until the end, then finishes in a slightly medicinal but earthy way like willow bark. Creamy texture.

Final Thoughts: Though it’s the lesser rye-containing expression, rye is what really comes through in the Barrel Proof Bourbon. It lacked the sweetness characteristic of bourbon, any sweetness associated with rye, but also the intensity of rye. Rye is really where this distillery shines, and this bourbon just didn’t have the amount of flavor I was expecting it to.

The High Rye Bourbon is the sweeter of the two. It’s warm, definitely, but pleasantly so. The flavors were complex and moved gracefully, bringing out multiple at once of the elements typically found in rye whiskey.

22
Shares
3.8k
Views
Share on FacebookShare on TwitterGet Our Newsletter
Get The Macallan® Rare Cask at ReserveBar. Shop now!