Editor’s Note: These whiskeys were provided to us as review samples by Rabbit Hole. This in no way, per our editorial policies, influenced the final outcome of this review. It should also be noted that by clicking the buy links in this article our site receives a small referral payment which helps to support, but not influence, our editorial and other costs.

The Whiskey Wash, though, had yet to take a deep dive into the remaining three flagship releases from the relatively young Louisville distillery. So we’re back for another bite of the Rabbit Hole apple, and another conversation with founder and whiskey maker Kaveh Zamanian.

“No two expressions are the same,” Zamanian told me when I asked about the flagship releases. Collectively, he said, the whiskeys should “give you a tasting experience that covers a broad range of notes and flavors.”

The Cavehill bourbon (black label) is named for Louisville’s historic Cave Hill Cemetery, the resting place for some of Kentucky’s whiskey pioneers. Its mash bill is a mix of corn, wheat and two types of malted barley – resulting in a friendly, mild bourbon that sidles up and gives you a bro-hug like an old friend.

The Heigold high-rye bourbon (blue label) features 25% imported German rye, and is named in honor of Christian Heigold, a stonemason from Germany who settled in Louisville in 1850. The Heigold House Facade, featuring his stone carvings, remains a postcard-ready stop on any tour of Louisville today. The rye spice is definitely apparent in the bourbon named after him, and will attract those who appreciate high-rye bourbons like Four Roses, Basil Hayden’s or Bulleit.

The Dareringer sherry-cask finish bourbon (burgundy label) features a mash bill with 18% wheat and 14% malted barley. Named for Zamanian’s wife Heather, who he says is sweet and elegant and dared him to go down the rabbit hole of bourbon, this whiskey is trying to thread a difficult needle. Bourbons are already relatively sweet – often providing hints of honey, vanilla, butterscotch and brown sugar – so sherry-cask finishing risks pushing it over the top into cloying.

The Boxergrail rye (green label), as I wrote in December, is a tip of the cap to Louisville native Muhammad Ali and more broadly to the city’s history of neighborhood boxing gyms. While not as intense as the Founder’s Collection Straight Rye, the flagship Boxergrail still packs the punch you expect from rye while adding a layer of grass and vegetation that is distinctively Rabbit Hole.

Zamanian, for his part, is far from humble about his aspirations for the entire line.

“I want Rabbit Hole to be seen as The Beatles of American whiskey, putting out hit after hit,” he told me. “I just hope I live long enough to taste all the great whiskey we’re laying down.” 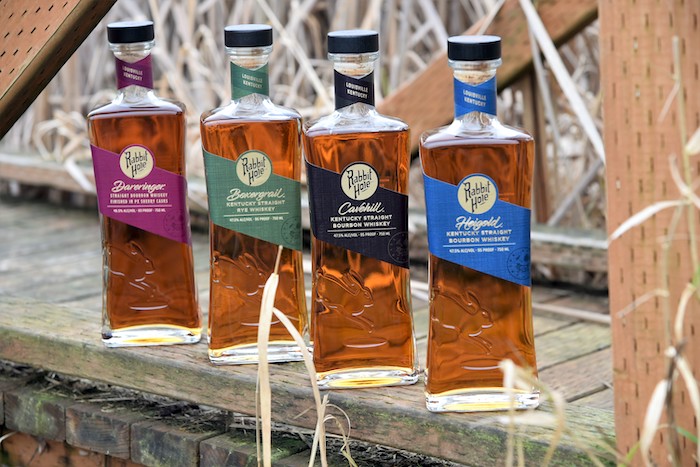 Nose: Pears, honey, chewy ginger molasses cookies. There’s something that makes me think of citrus going on, too.

Palate: Gentle and not too complicated. Citrus notes here again, as on the nose. Velvety mouthfeel, which brings toffee and vanilla-bean ice cream to mind. The finish is relatively short; this is a whiskey that doesn’t linger.

Nose: Sweet on sweet, with bourbon influenced by the sherry casks. The finishing is more pronounced than you would expect, but it works. This is whiskey that smells delicious. Brings to mind tawny port.

Palate: Pedro Ximénez (or PX) is a white Spanish grape varietal most commonly used in an intensely sweet dessert wine. The PX influence in this case results in a relatively easy-going bourbon. Ultimately, the sherry-cask sweetness covers too much of the traditional bourbon flavor for me. The cask finishing is stronger than you’d expect (as it was with the nose), but the effect isn’t the same in the mouth. The wheat content and cask finishing combine to bring the sherry to the forefront.

Don’t get me wrong; it’s not bad. I’d characterize it as pleasant and gentle, which is what some people are looking for in a bourbon. For someone who loves traditional bourbon, though, this is a little too fancy-pants.

Nose: The first thing I smell is a layer of rye grass, herbal and vegetal. Beneath it are hints of dark fruit; perhaps plums or dark cherries. Finally, there’s the slight spiciness of nutmeg.

Palate: Vegetal notes are evident here, too. The first thing I taste is cut grass, though it’s followed quickly by pears, black pepper, cloves and molasses.

Final Thoughts: Zamanian makes no bones about the fact that he’s trying to do something distinctive with Rabbit Hole. He doesn’t want these whiskies to taste like anything else on your shelf, and I would have to say he’s succeeding. Whether that fact appeals to you or worries you is a personal preference. In any case, the bottles are beautiful – with debossed (indented) rabbits in the glass – and the juice inside them tends toward the idiosyncratic.

For a young distillery, Rabbit Hole is pushing boundaries while keeping these flagship expressions affordable. For that I give the company two thumbs up, even as I look forward to seeing what Zamanian will dream up for the future.