Editor’s Note: These whiskeys were provided to us as review samples by Luca Mariano. This in no way, per our editorial policies, influenced the final outcome of this review. It should also be noted that by clicking the buy links in this article our site receives a small referral payment which helps to support, but not influence, our editorial and other costs.

The Luca Mariano Signature Bourbon that came out January 17th of last year was a dual homage – to founder Francesco S. Viola’s birthday and the 100 year mark of the start of Prohibition in America. A strange thing to honor, considering that Prohibition wasn’t exactly the greatest time for American whiskey.

But Prohibition plays an important role in the Luca Mariano story. Francesco Viola’s great-grandfather Baldassare found himself in debt to the Sicilian mafia in the 1920’s, which they found a solution for. He became a liquor runner in America, making runs between Ontario and Michigan (where the family later settled, and Viola still lives), and also working in New York and Chicago.

Viola defied some laws in the beginning of his whiskey career as well. He started as many craft whiskey makers have – with a hobby. He had a neighbor over for a friendly dram one day, and found out that his distilling hobby was actually against the law.

This hobby had started with his grandfather, Mariano, who taught him how to distill and cook, among other skills. The still Viola started with, in fact, was his grandfather’s that had been left to him. Much of the vision for the entire company was inspired by Mariano. On an episode of Nick Drinks, Francesco and Nick opened the first bottle of this Signature Bourbon, they dedicated the first drink to Francesco’s grandfather and great-grandfather.

Though you’re not supposed to have a favorite, according to Viola, this is his. The inspiration for this bottle came from another of Viola’s loves: cooking. He likes to smoke with cherry wood, specifically, and incorporated that into this expression. A large portion of the mashbill consists of barley that was malted with cherry wood, a highly unusual move for a bourbon.

Only two barrels of this whiskey were made, amounting to under 500 bottles, and only released in Michigan. This special release Signature Bourbon  followed the original bourbon release of Old Americana in 2019. “Old Americana” is what Viola’s grandfather called their style of distillation, making it a fitting title for the first release. The Single Barrel expression followed the Signature Bourbon, in less limited quantities of course.

Luca Mariano has two more bourbons slated to come out in 2021 and 2022, exploring the flavors of different mash bills and grains. 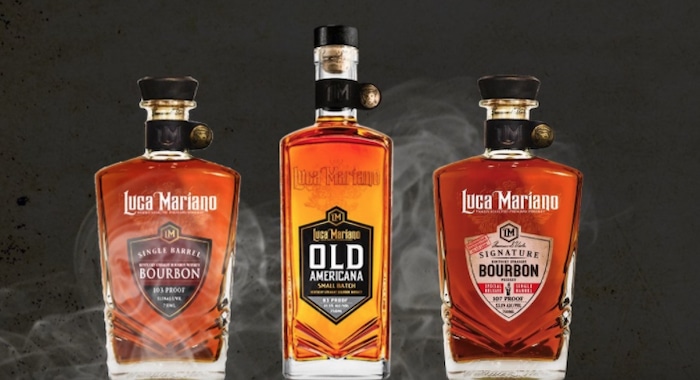 Palate: Not terribly complex, more lightly sweet than the nose would have led you to believe. Traditional bourbon flavor of oaky vanilla flows from beginning to end, only distinguished by the heat of the whiskey. Water softens some of the bite of the high proof, but does reduce some flavor.

Appearance: Very, very similar to the Single Barrel, but with a honeyed cast to it.

Nose: Again similar to the Single Barrel, but richer. The first hints of the smoke to come whisper out of the glass.

Palate: Soft, creamy texture throughout. Sweet all the way through, smoke comes in gradually, with the fruitiness of the cherry wood.

Appearance: Muddied amber of a smoggy or smoky sunset.

Palate: Shockingly strong grassy rye pop up front, but mellows quickly into cereal grains, and only leads into sweetness at the back palate. The finish is quick and comfortably warm with a touch of spice and oak.

Final Thoughts: None of these bourbons were terribly complex or flavorful. The smoked element of the Signature Single Barrel is unique, certainly, and was executed well. I felt like the wood smoke aspect went well with the nature of bourbon, and was a creative approach. That creativity could mean some interesting things to come out of this distillery in the future.