Editor’s Note: These whiskeys were provided to us as review samples by Kooper Family Whiskey. This in no way, per our editorial policies, influenced the final outcome of this review. It should also be noted that by clicking the buy links towards the bottom of this review our site receives a small referral payment which helps to support, but not influence, our editorial and other costs.

Troy Kooper was once a very successful ad executive, but his job demanded he be away from home for long periods of time, while his wife, Michelle, stayed home with their first child. Both were hoping to find something they could work on together from home, so Troy could be home with his wife and child. One night, over a couple of glasses of whiskey, it hit them; why not make their own whiskey!

While the Kooper’s originally started out attempting to distill their own whiskey, it didn’t take them long to change their approach. Due to the cost and time intensive art of distilling, they decided to focus on blending and aging whiskey. With this in mind, they began touring local whiskey makers, and soon began buying unaged distillate whiskey from other companies. Their first purchase was 175 gallons of unaged distillate from the Koval distillers. They barreled and aged it in the hot Texas climate, then later released it as the Kooper Family 100% Rye Whiskey.

While not distilling their own whiskey, their whiskeys are still unique, as the aging process is what creates the different flavors and tastes in each whiskey. They begin with a series of different oak barrels; American Oak, European Oak, and second use oak casks.

The second aspect is the climate the whiskey is aged in. While Scottish and Irish whiskeys are aged in a cooler climate, and most American whiskeys are aged in the more moderate climates of Tennessee and Kentucky, the Kooper’s age their whiskey in the extreme Texas heat. They claim this expands the whiskey deeper into the wood. Also, during winter months, there are extreme changes of temperature, such as January temperatures fluctuating from 85 degrees to 36 degrees. Once aged, they then blend different barrels to find the right flavor they are looking for.

For this review we are taking a look at the previously mentioned rye as well as a straight bourbon. 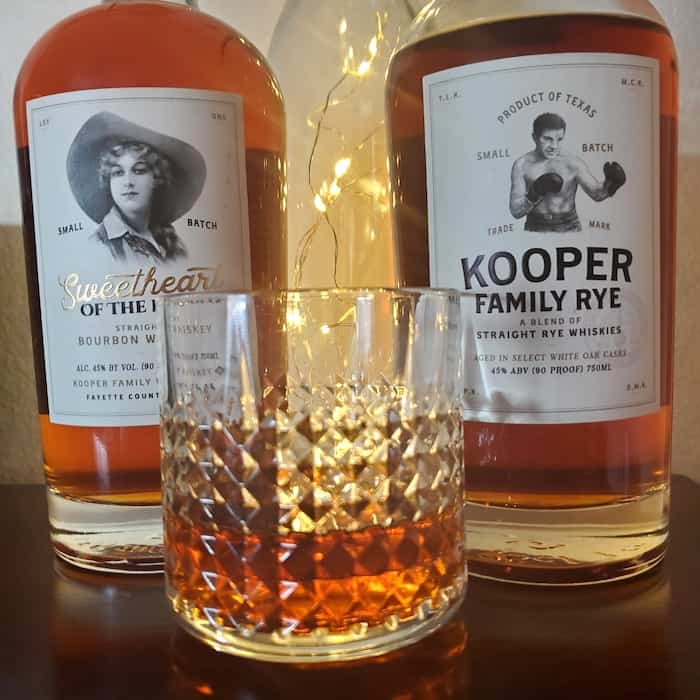 Nose: A nice slight touch of dill with a mix of vanilla, with a touch of fruitiness.

Palate: Definitely get hit immediately with the smokiness and spices.  This is followed with an interesting  touch of black pepper with a hint of caramel.

Final Thoughts: I was actually surprised by the touch of dill on the nose. While this was stated in the information on the website, it is definitely one of the first smells that hit you with this Rye whiskey. I also have to state, the choice to have Troy Kooper’s boxer grandfather on the label is a great choice, as there is a terrific ‘punch’ from this rye.

Vital Stats: This whiskey is aged in 4 years in white oak barrels and consists of 75% corn, 21% rye, and 4% malt. Named from the nickname Troy Kooper calls Michelle Kooper. 90 proof (45% ABV).

Palate: Very nice warmth, and soft touch of spices and oak. There is a nice final note of caramel and honey.

Final Thoughts:  This bourbon starts out very sweet, with a slow warmth following with the honey and caramel. Definitely sweeter to start than most bourbons. This is a wonderful bourbon blend, and one I would recommend for a beginner bourbon and whiskey drinker.

57
Shares
2.1k
Views
Share on FacebookShare on TwitterGet Our Newsletter
Cheers to the Dads! Personalize a bottle of his favorite whiskey to create a modern gift for the modern man. Use code: FATHERSDAY20 for $20 off your next order of $100 or more at ReserveBar