Editor’s Note: These whiskeys were provided to us as review samples by Grand Traverse. This in no way, per our editorial policies, influenced the final outcome of this review. It should also be noted that by clicking the buy links towards the bottom of this review our site receives a small referral payment which helps to support, but not influence, our editorial and other costs.

I love a good family whiskey or whisky story. They are generally an homage to traditions, passions, and inspirations. Many of the larger distilleries stem from small beginnings in one way or another.

The Grand Traverse Distillery is no different. This story begins with Kent Rabish and his siblings discovering a still hidden away in the back of a barn on the family farm. According to Rabish, his grandfather George had dabbled some in the production of booze. After all, they were farmers and had grains to spare to produce a little sipper for the end of the day.

We fast forward to 2005, and Rabish was inspired to open up the Grand Traverse Distillery with products hitting the market in 2007. It was the first craft distillery to land in the Northern Michigan area and in a bold move, decided to focus on the use of local grains. These days, the distillery trade has expanded in the area with competitors entering the mix. As a family business, Kent’s son Landis has worked his way up through the ranks to currently hold title of head distiller, and as a family push forward to make products that they are proud of.

Amongst their portfolio are a variety of products. Naturally there are bourbon and rye whiskeys, as well as a blend of rye and peated barley. Cherries are a big thing in the area, so of course there is a cherry whiskey, which I imagine is quite popular. In addition, Rabish and company make different expressions of vodka, gin, and rums. 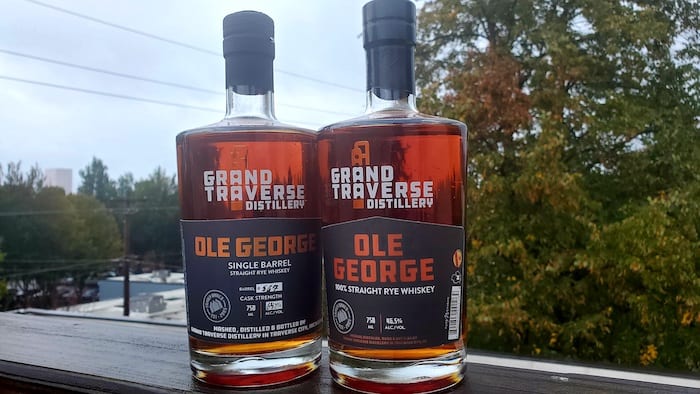 Appearance: A dark orange, which can be a considerable amount of color for a younger whiskey. In the glass, found slow, multiple legs.

Nose: A bold nose. A general melange of flamed orange zest with a notion of Earl Grey tea. Definitely a bit of heat, though not overwhelming. After a few minutes, re-visited the glass and picked up a touch of caramelized sugar in the middle.

Palate: Signature flavors of a rye whiskey. Some black pepper amongst fall spices. More of a medium body, but still had a lingering finish with some citrus towards the end.

Vital Stats: 128.2 proof, 64.1% ABV. There wasn’t much documentation on this one, so I am guessing that it is the same mash bill as the straight rye. The main difference being that this is a single barrel and a significantly higher proof.

Appearance: I was surprised at the similarity of the color as the straight. Perhaps a tad bit darker, but still that darker shade of orange or perhaps topaz.

Nose: Big and boozy nose. Once again, there are those citrus and peppery elements with that tea-like characteristic in the background.

Palate: First taste was big spice right in your face. It’s rich and has that long finish. Compared to the straight rye, this has accentuated notes of brown sugar or perhaps graham cracker and orange marmalade.

I thought that this duo was solid. Definitely, the straight rye is more of a daily sipper, while the single barrel may be reserved more so for special occasions. I always appreciate it when a distillery focuses on the use of local grains and has that pride of what they are using.

These whiskeys are straight forward in what they are and the flavors that the distillers seek to convey. I’ll admit to being curious as to what the rest of their portfolio has to offer, especially in the whiskey realm!