Editor’s Note: These whiskeys were provided to us as review samples by Glendalough. This in no way, per our editorial policies, influenced the final outcome of this review. It should also be noted that by clicking the buy links towards the bottom of this review our site receives a small referral payment which helps to support, but not influence, our editorial and other costs.

Of all my reviews, I have never felt more connected to a distillery than I do with Glendalough. The figure of St. Kevin is prominently displayed on the bottle, and for me it calls me back to my favorite tarot deck, The Wildwood Tarot. St. Kevin is on the bottle because he founded a monastery in the Wicklow Mountains of Ireland. Five friends left their day jobs and went into the mountains as St. Kevin did, but they instead founded Glendalough Distillery.

Wood plays an integral part, and as with tradition, Glendalough first ages their whiskey in ex-bourbon barrels. The next part is magic with the regular use of rare Irish oak, and Japanese Mizunara casks for the 17-year-old. Why is Irish oak so rare? Well, only 0.2 percent of oak forests cover Ireland thanks to the Queen of England. During the 16th century, the Queen ordered the ravaging of Ireland’s trees to build ships.

Irish oak is different from American oak because it is more porous and open, which allows the whiskey to reach deeper in the wood. Each tree felled is at least 130 years old. I know! I was shocked that a simple barrel would be made of this, but Glendalough Distillery is actually a warden of the woods. They work under a “Continuous Cover Forest Management System” because if any of these old oaks fell naturally, then beech trees would overcome the oak saplings. Glendalough plants seven oak saplings in place of every tree they fell.

While we have previously done a whiskey review roundup of other Glendalough whiskies, I’m really curious to see how these magnificent trees affect the whiskey, so let’s take a look… 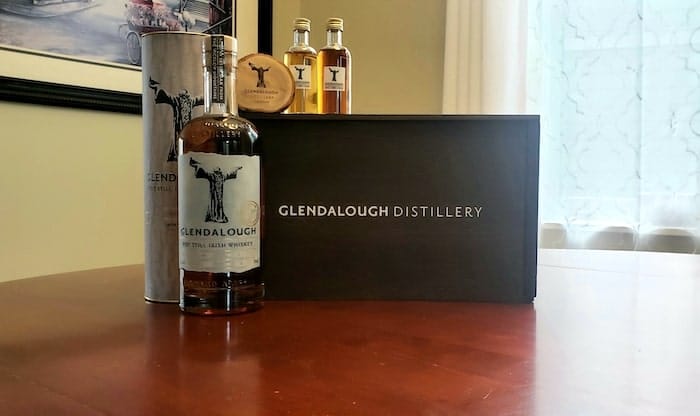 Nose: It’s very light on inhale, and doesn’t burn the nostrils. It’s nutty, but on the other hand it isn’t like brittle. The sweetness is more like a soft caramel chew from seaside confectionaries. Golden raisin is featured throughout the middle of the dram. I get a slight herbaceousness from rose hip and spearmint.

Palate: The mouthfeel is soft and velvety. It’s not viscous or too light on the tongue as it does have some weight to it. It’s woody, but not in the usual way. Despite the nose, the pot still is not very sweet on the palate. It is, however, a little bitter like tea. There is a slight burn on the finish, and the whiskey leaves a minty aftertaste.

Final Thoughts: There is something about the Glendalough Pot Still. It’s an enigma and a true experience unlike any other Irish whiskey I’ve tasted.

Nose: The first thing I can smell is jasmine blooms. There is lots of orange zest and even satsuma juice. Raisin mingles with a bit of caramel. It’s woody like cedar, but more so on the umami side.

Palate: It’s very warm going down. The mouthfeel is creamy. I get an umami taste. For example it’s not wood, not soil, but something. The whiskey is very reminiscent of an herbal tea, or even an oolong tea as it has a similar sweetness sprinkled throughout. The whiskey has a slightly smoky finish and aftertaste.

Final Thoughts: For a 17-year-old whiskey, it is incredible and kind of indescribable. The Mizunara imparts such a unique flavor that you won’t find anywhere else. If I were you, I would buy this.

Nose: Super sweet raisin notes over power the dram, but in a good way. The raisin is thee followed up by bright lemon peel. Dry oak and caramel round of the end.

Palate: A lot of vanilla comes in the first wave. The mouthfeel is velvety soft. There’s more spice to it than the other two Glendaloughs. I particularly taste clove. Cedar and tobacco finish on the tongue, but it’s not dry. I am reminded of Palo Santo. The aftertaste leaves me with coffee bean on the tongue.

Final Thoughts: I want more of this! I am very picky about Irish whiskies, but the Glendalough Distillery has made some outstanding whiskies. Carefully crafted, the 25-year-old whiskey gives an ample reward in flavor thanks to the patience it received.