Editor’s Note: These whiskeys were provided to us as review samples by Lux Row Distillers. This in no way, per our editorial policies, influenced the final outcome of this review. It should also be noted that by clicking the buy links towards the bottom of this review our site receives a small referral payment which helps to support, but not influence, our editorial and other costs.

Daviess County is on the Kentucky-Indiana border, about 100 miles southwest of Louisville. It’s pronounced “Davis” County, and had a vibrant bourbon tradition that included as many as 20 large distilleries in the pre-prohibition years. One of them was Daviess County Distilling Company, which claims it can trace its history back to 1874.

These days, the county is home to only three active distilleries and is not really in the heart of the Bourbon Trail (which runs more or less from Louisville to Lexington and on down to Danville and Loretto). But Bardstown, home of Lux Row Distillers, is right in the thick of things – and has since 1993 owned the rights to the Daviess County Distilling name. This past spring, Lux Row decided to finally launch its Daviess County line with a trio of bourbons featuring identical mash bills but different barrel finishes.

Brand manager Eric Winter told me Lux Row worked with a private-label distiller to create a batch of high-rye bourbon and a batch of wheated bourbon, and then blended them to get the final product. That’s what ends up in the bottle as the Daviess County Straight Bourbon.

The goal of the “mixed mash bill,” Winter said, is to create a unique balance of sweetness and spice you wouldn’t get with a more traditional approach. It also gives Lux Row an extra dose of flexibility, though the blending process, to create distinctive Daviess County flavors.

The Cabernet Sauvignon Finish takes the same four-year-old bourbon and finishes it for an extra six months in California wine barrels, and the French Oak Finish gets six additional months in French oak. Not everyone will buy all three bottles and taste them side-by-side, but it’s an interesting experiment for those who do. For the same whiskey distilled the same way by the same team – and aged identically for four years – they end up with significantly different flavor profiles.

Winter said Lux Row is distilling its own juice these days, and hopes to move away from sourced product and begin bottling its home-grown whiskies soon. He also said Lux Row is “working on some additional finishes and line extensions” for the Daviess County label, though he declined to tip his hat about what those will be or when they might be released. 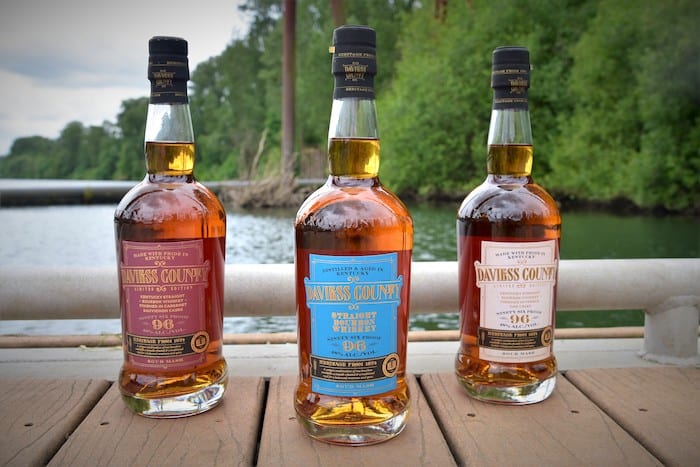 Appearance: Burnished brown, on the light side

Palate: You can taste the rye spice up front, like a classic high-rye bourbon. It evolves into black pepper and Earl Grey tea, but never really mellows into the sweet bourbon notes you’d like to find. The finish is long and astringent.

Nose: The cabernet sauvignon barrels really come through on the nose. It’s much sweeter smelling than the straight bourbon. Hints of milk chocolate and coconut.

Palate: The flavor, meanwhile, is fairly close to that of the straight bourbon. Still taste the rye up front, although the finish is more honeyed. This bourbon is peppery and fruity, with a touch of cloves. All told, it’s mellower and more easygoing than you expect from the mixed mash bill and the spicy start.

Appearance: Burnished brown, on the light side

Nose: Softer than the other two, suggestions of honey and custard.

Palate: Less of a punch up front than its two siblings in the Daviess County family. Smooth at the outset, but still not with the big corn taste you find in some bourbons. Dark chocolate, roasted coffee beans. The finish is spicy, and lingers longer than the other two.

The Daviess County promotional materials throw around tag lines like, “wheated meets ryed” and “sweetness meets spice.” It is a distinctive way to make and finish and blend their bourbons, and it’s an enjoyable experience to taste them one after the other so you can really appreciate the differences. Any of the three are going to appeal to buyers who enjoy high-rye bourbons.

But I took all three on a fishing weekend with a group of guys recently, and everybody on the trip came to the same conclusion: If you were going to buy only one, make it the French Oak Finish. That’s the head of this first Daviess County class.

44
Shares
6.7k
Views
Share on FacebookShare on TwitterGet Our Newsletter
Cheers to the Dads! Personalize a bottle of his favorite whiskey to create a modern gift for the modern man. Use code: FATHERSDAY20 for $20 off your next order of $100 or more at ReserveBar