Editor’s Note: These whiskeys were provided to us as review samples by Corsair Distillery. This in no way, per our editorial policies, influenced the final outcome of this review. It should also be noted that by clicking the buy links towards the bottom of this review our site receives a small referral payment which helps to support, but not influence, our editorial and other costs.

Upon first glance at a Corsair Distillery bottle, you may think of a Quentin Tarantino film; three nicely dressed men in a black and white picture, with a certain level of swagger to them. While it may be similar to the imagery of a certain modern gangster movie, the three men are actually from a picture distillery co-founder Derek Bell took outside of a pub in Scotland.

Bell and his friend Andrew Webber started out homebrewing beer and wine in the fomer’s garage. At the time, they were also attempting to create a bio-diesel fuel for home use, but hit a snag. They instead decided it would be much more satisfying to create whiskey instead. This led them to start researching spirits and distilling.

While both are residents of Nashville, Tennessee, they set up their first distillery in Bowling Green , Kentucky in 2008. At the time, craft distilling was not yet legal in Tennessee. However, after advocating to change the laws, by 2010 the duo was able to open their second distillery in Nashville.  In 2016, they opened a second Nashville distillery, allowing them to increase production on their whiskey and other spirits, while allowing the older Nashville distillery to focus on their craft beer products.

Both Bell and Webber work on creating spirits using unusual and unconventional ingredients in their spirits, from creating a whiskey with a quinoa base to pumpkin spice flavored whiskey.  They work hard to source as many ingredients as they can locally, including growing and smoking their own grains on the Bell family farm, just outside of Nashville.

The whiskeys I review below, Dark Rye and Triple Smoke, are long standing flagship whiskey offerings for Corsair. They’ve gone through a repackaging design. 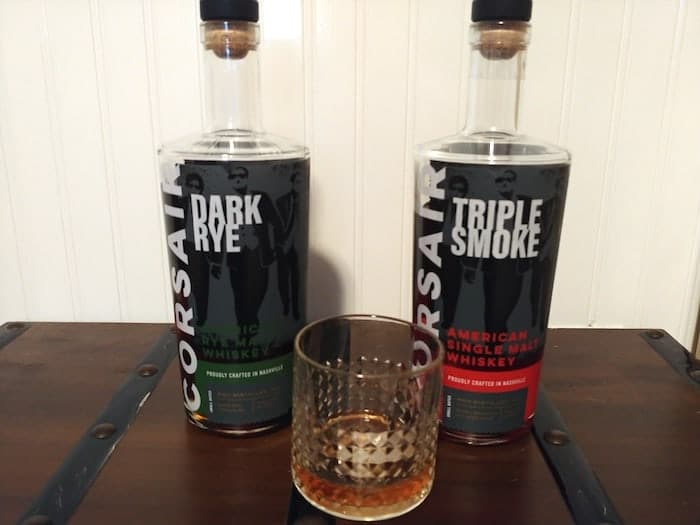 Nose: There is a nice aroma of fruit and rye, with a slight hint of chocolate.

Palate: The first thing that hits is the spiciness of the rye, followed by a sweet oakiness. It finishes with a definite hint of chocolate.

Final Thoughts: As far as rye whiskeys go, this is definitely a smoother rye than most I have had. The spice level seems more intense than most as well. I love the finishing chocolate flavor. I had a hard time deciding if the after taste was similar to some of the more high end chocolates, like Lindt or Ghirardelli, or if it was more of a dark chocolate finish.

Either way, this is a very nice, sweet-yet-spicy, rye whiskey.

Nose: There is definitely a lovely smoky aroma, with a sweetness lingering, possibly from the Cherrywood.

Palate: a very lovely sweetness along with the smokiness, maybe again from the Cherrywood?

Final Thoughts: This is a very lovely whiskey. I love the smokiness from the three smoked woods. The sweetness and aftertaste very much remind me of the lovely smoked beef roasts I have cooked recently. It definitely leaves me with that same sweet and smokey aftertaste.

Just an average guy with a background in food service and retail management. In my mid 20’s I developed a deep love of whiskey based drinks. After receiving a bottle of 15 year old Scotch whiskey as a birthday present, I soon began a yearly ritual of trying a new...