Editor’s Note: These whiskeys were provided to us as review samples by Boulder Spirits. This in no way, per our editorial policies, influenced the final outcome of these reviews.

Colorado continues to blaze the way in craft American whiskey. With the Centennial state surpassing over 100 distilleries in 2018, dozens of brands have spilled over into national and international distribution. Breckenridge, 291, Laws, Stranahan’s and Deerhammer to name but a few.

The reason for this boom? Well, undoubtedly the Rocky Mountain snowmelt, wide and open areas to grow local grains and the arid climate are all factors that lead to creating distinctive spirits, especially for whiskey. Elevation above sea level has definitely been incorporated into a lot of the craft distilleries stories around maturation as well.

One notable person who saw all the natural benefits of the state and more back in 2011 was Alastair Brogan, now owner of Vapor Distillery. Moving from Scotland, Brogan and his family looked to settle and live out his new passion for distilling in Boulder, Colorado. Accompanied with a 1,000 gallon Forsyth still, the Scotsman looked to make a traditional single malt.

However, meeting with local brewer/distiller Ted Palmer of Roundhouse Spirits, it became clear that the America’s native whiskey, bourbon, had to be a part of his distilling future. Per Ryan Negley, Brand Ambassador and Sales at Boulder Spirits, “the first whiskey we put down was actually some peated malt whiskey. Then it was the non-peated or what will become our flagship. Then we cooked the bourbon.”

Vapor Distillery in its inception in 2015 built at a large and fast scale, laying down a bunch of smaller new American Oak barrels first and then progressing to the larger format.

It is clear that despite the main goal of creating the best single malt whiskey with the best local tools, Brogan wanted his bourbon to reflect his palate as well. Going with a 51% corn, a whopping 44% malted barley and a 5% rye as their mash bill, the bourbon whiskey is unlike most on the general market. 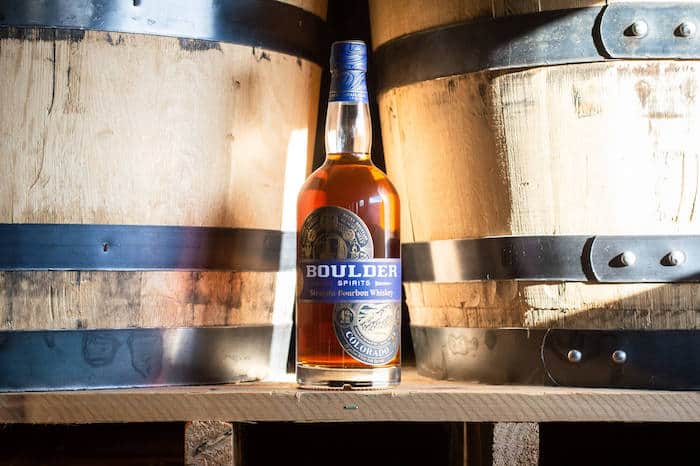 Final Thoughts: The Boulder Spirits Bourbon Whiskeys, like its Single Malt portfolio, is solid. The drier palate in bourbon whiskey has always seemed to be difficult for American craft distilleries to pull off. The margin of error is thin and this no doubt makes these particular offerings even more noteworthy.

As Vapor Distillery enters its sixth year, it will be very interesting to see how the balance of drier palate and longer time in wood plays out. The Bottled in Bond expression shows worthwhile advancement. Notable bourbon whiskey continues to be found outside Kentucky. Especially by those who look to add value versus replicate what’s known.