Editor’s Note: These whiskeys were provided to us as review samples by Bespoken Spirits. This in no way, per our editorial policies, influenced the final outcome of this review.

Let’s talk about innovation. Innovation is what allows for the experience of a master maker’s past to be brought to life, to create more efficient practices, or to implement cleaner business practices. I am not against innovation. What I am not a fan of is shortcuts. I stand by the masters who pour their heart and soul into their creations. I believe in the artists that strive day in and day out to put their vision into the world. I believe in disciplined knowledge that is gathered through years of trials and tribulations, through practice, experimentation, and the application of the skills gained through this discipline.

Where does this high and mighty rant come from? It comes from years of working to better myself as an artist, musician, and author. It comes from the appreciation of masters of their craft. It comes from watching student after student walk in my door with the latest and greatest piece of equipment or shortcut to achieve what generally takes years to develop the strength for.

It comes from watching those same students crash and burn and have to be picked up to restart from scratch as they realize they have just set themselves back multiple steps in search of the easy way out. It comes from drinking whiskies, bourbons, and rums that are crafted, not out of passion and discipline, but through rushed processes that ultimately leave them void of depth and lacking in maturity.

When doing reviews, I strive to do my tastings as blind as possible. I will give the bottle a glance but try not to dive into the story printed on the side so I am not unduly influenced by the marketing team’s interpretation of what I should taste. That also means I give the same weight to every bottle before knowing its full story or that of its producers. I say this so you understand that I went into this tasting with positive intentions and came out with a less than positive experience.

This batch review covers six bottles of custom creations from Bespoke Spirits. They do have a nice collection of awards associated with their flagship bourbon, and the founders are tech and financial guys who saw a way to skip the line and build a custom spirits company on, as they put it, “the premise that a spirit’s color, aroma, and most importantly taste, could be designed, engineered, and precisely controlled with modern science, technology, and data. Rather than putting the spirit in a barrel and waiting passively for nature to take its course, Bespoken instills the barrel in the spirit, actively controlling the process to deliver premium quality custom spirits in days rather than years.”

This is an interesting prospect and a fun gimmick, but does it build a strong enough flavor base to enthrall serious tasters/drinkers past the first sip or so? Let’s find out below. 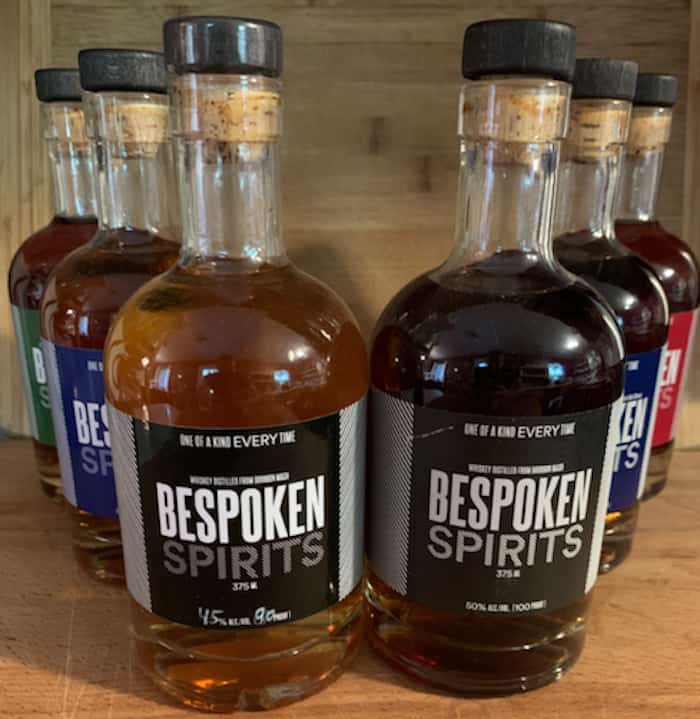 Vital Stats: 94 proof and flavored by adding new charred oak staves into the mixture for a number of days.

Nose: I was able to pull citrus and banana notes from my first few whiffs. After another couple I caught a bit of fruitcake and burnt sugar along with just a hint of oak.

Palate: This bourbon had a bright oaky front. The heat was decently balanced with a buttery back end. The citrus notes I caught punched their way through the initial notes and I was left with an aftertaste of butterscotch candy. Not like a Werthers. More akin to the less expensive hard candy that litters a grandparent’s stale candy dish.

Final Thoughts: The process of adding various woods to alcohol is not a new process. There are a couple of products on the market that the average person can go out and purchase to drop in their whiskey or bourbon to artificially age and flavor their drink. That is all that is really happening with this bourbon.

That being said, this is not a bad entry for a bourbon. I would not kick it out of my liquor cabinet, but there was very little that was exciting about this drink either. Easy to drink, but it tastes young.

Vital Stats: Designated as 90 proof and from the fifth batch.

Nose: My first impression was of the smell of rust and antiseptic—not the most inviting of notes right out of the gate.

Palate: It tastes of plastic with a hint of banana bread, like biting into your afternoon snack but forgetting to unwrap the cellophane first. The heat was prickly and stuck around a bit long. There was a hint of cinnamon oil present as well.

Final Thoughts: Could be used as an accent piece in a mixed drink but I would not be in a rush to drink this on its own. Again, this tasted very young.

Vital Stats: Light whiskey, by definition, is distilled to be between 160 and 190 proof and designed to be easy drinking as compared to imports that were thought to be competitive to American bourbons. This one comes in at 100 proof.

Nose: Back to grandma’s for a whiff of stale butterscotch candy. You know the kind: bright yellow and a clinging wrapper that would be easier to eat along with the candy than to strip off from its sticky host, one strip at a time.

Palate: Butterscotch candy ushers this one across the tongue. It is a sharper heat than my preference usually leans towards. It has oak on the back end as well.

Final Thoughts: This is another spirit that would be a decent accent or addition to a cocktail. With its character, I would be willing to put it in a nice hot toddy with its butterscotch and the aftertaste of clove and orange.

Nose: Dried fruit such as prunes or raisins come up to the front. There is also a dark molasses note chased by a hint of orange peel.

Palate: There is a malty front accompanied by the taste of a mushy oatmeal raisin cookie and a hint of apple. The heat was more tolerable in this one. The back end was flavored with a bit of banana, oak, and an aftertaste of cinnamon.

Final Thoughts:  As with the others, this one is not a drink I would gravitate towards on my own and mostly tastes young and rushed in its creation.

Vital Stats: 100 proof and flavored/aged with the American oak staves.

Nose: The nose was decently comforting with the scent of raisin, plum pudding, and prunes.

Palate: Drinking this was similar to sitting down to a cooled bowl of oatmeal with raisins. There was an oakiness to the rye with a sharp cinnamon note on the front of the tongue. As the rye moved to the back of the tongue, I caught the taste of clove and prunes.

All of this was accompanied by a not too unpleasant prickly heat that dissipated along with the flavors with very little lingering tastes or heat.

Final Thoughts: This last sample utilized the oak staves again to artificially age the young rye so it can sit at the table with the older kids. In this case the technique was more successful than before. This was one of about two or three that were not overwhelmingly young-tasting and I was OK with drinking it solo.

In Summary: I cannot fault people for wanting to bring something new to the forefront of the drinking world. Innovation is what keeps whiskey tasting interesting, and I am always happy to try new things that work. I do hold umbrage with the shortcut-takers of the world who view the creative process as nothing more than an easy way to make a buck.

For art to be sincere and filled with longevity, there must be the pains of discipline and hard work, and yes, long hours/months/years of investment to yield the sweetest fruit. I hope this company is eventually able to take their successes and put their energy into crafting a better strain of base liquors to build their brands off of with less cut corners, and more love, sweat, and growth.