Blending is an art. Music producers blend samples and sounds to find a balance of inspiration and creative expression. Artists blend colors to evoke an emotional response. With whiskey, it is about finding a balance of flavors and heat that will intrigue, invite, and saturate the taste buds to bring you back, sip after sip, bottle after bottle.

Barrell Craft Spirits was founded on the idea of not building from the ground up, but on blending the flavors of procured spirits to create new visions of what they started out as. The talent behind the brand is obvious with a passionate crew looking to bring the tradition of blended whiskeys to the forefront of the American market.

Blending is present in many of the recognizable Scottish brands like Johnnie Walker. Adapting this long tradition and business model is pretty smart when the goal is to kickstart a company by highlighting the flavor profiles that the creative minds behind the glass are wanting to present. But does it always work?

With regards to the Barrell Craft Spirits Private Release Bourbon bottlings reviewed here, the results are mixed. This project, for those that don’t know about it, “is a range of 49 unique releases marred in ex-bourbon barrels. For the special release selected bourbons were ‘sourced from Kentucky, Tennessee and Indiana, spread across four different ages and then blended them into 49 different recipes. Each blend number has its own ratios, printed on the label and is constructed in its own ex-bourbon barrel. With each release, a new set of base bourbons is selected, so every recipe is only made once.'”

These bourbons are targeted towards “retailers, bourbon clubs and whiskey aficionados,” with each offering being produced as a limited release, having a distinct flavor profile and containing between 150-180 total 750ml bottles, with price of around $110. 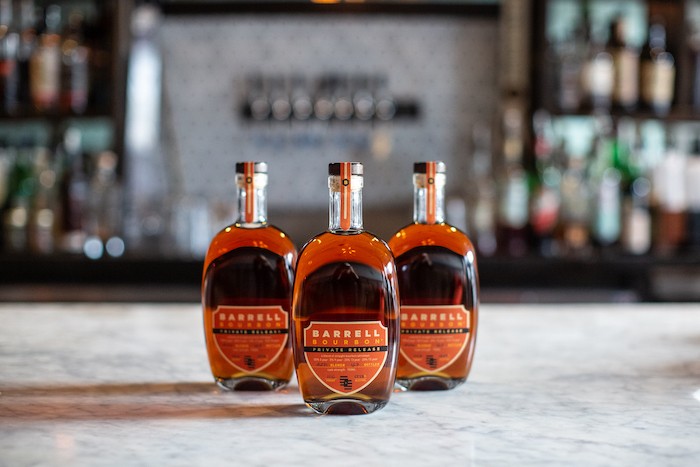 Appearance: Light amber was a predominant color with each of these samples.

Nose: Butterscotch greets the taster with the initial whiff followed by a rich brown sugar note. Oak sneaks in with a bit of a saw dust element followed by the fruitiness of orange peel. Finally the hearty waft of banana bread sneaks in to round out the nose.

Palate: Bright prickly heat strikes the tongue first. A sweet, medicinal flavor like a Luden’s cough drop supersedes the citrus notes that follow. White pepper keeps the heat alive on the back of the tongue and as you cut through the heat, cane sugar, clove, nutmeg and a hint of cinnamon take over.

Final Thoughts: The nose was inviting but the flavors were off balance even with a bit of dilution. For me this lands in the Maker’s Mark, Jack Daniels boat of over hyped concept and too sweet.

Nose: There is a strong butterscotch front accompanied by brown sugar once again. These initial notes are accompanied by a hint of banana and a bit of aged leather and oak.

Palate: A sharp heat up front that dissipates and lingers with a gentle prickle ushers in the flavors. Butterscotch and caramel come through first followed by a round of baking spices and cinnamon with a peppery back end. A splash of water smooths out the heat and brings forth a buttery note but still a bit more cinnamon hard candy in the flavor than I prefer.

Final Thoughts: This capitalizes on a more traditional Kentucky Bourbon flavor profile but suffers from a bit of unbalanced heat on the front.

Nose: There is a strong caramel and butterscotch influence on the nose of this sample. The richness is cut with a hint of cinnamon and citrus. There is also a bit of a medicinal note that carries through in the background.

Palate: A bright, medicinal front wakes up the palette. Heat builds after the swallow and leaves a medicinal note in its wake that tends to distract from the other flavors. In the end, it was reminiscent of orange Kool-Aid with a bit of burnt sugar and butterscotch on the back end.

Final Thoughts: It was surprising to see the citrus notes surrender to the medicinal quality of the palette. Could make an interesting mixer, but to relegate a private release to a mixer is not the direction I look for in more sought-after bourbons.

Nose: The nose on this was very heat forward and difficult to sift through to find specific flavors through the fumes.

Palate: The heat builds with each sip. There is an underlying sour note and an unflattering yeasty tone to the flavor. Sugar was the predominant flavor that presented with this sample. Citrus was trying to find its way to the front but couldn’t get past the cough syrup vibe that took over with the front of the palette.

Final Thoughts: This was not a bottle I would bring out to share.

Nose: The nose on this sample brought forth the vision of fruit cocktail upon my first wafts. This was accompanied by rich caramel and a hint of grains in the background.

Palate: A pleasant heat warms the palette in this sample with a good citrus forward note. Cane sugar and a hint of maraschino cherries bring out the fruit cocktail vibe I got from the nose. The back end of this one was peppery and left with a hint of maltiness.

Final Thoughts: A nice sipping bourbon with some interesting character but it leans on its sweetness a bit much for my personal tastes.