Editor’s Note: These whiskeys were provided to us as review samples by Barrell Craft Spirits. This in no way, per our editorial policies, influenced the final outcome of this review. It should also be noted that by clicking the buy links in this article our site receives a small referral payment which helps to support, but not influence, our editorial and other costs.

Oh, Barrell. What more is there to say? They must like spinning plates, or flipping bottles, or juggling lots of balls, because they’ve always got so much going on!

The Louisville, Kentucky-based Barrell Craft Spirits does not, for the most part, distill its own whiskies; they are an independent bottler and blender of whiskey, as well as rum. They’ve done a whole bunch of wacky yet riveting blends, such as an American Vatted Malt, Barrell Dovetail, and the Infinite Barrell Project.

Also, they consistently roll out new batches of bourbon, whiskey, rye, and rum, and have recently released their final batch of 2020: Batch 27. And since 2016, Barrell has also made a bourbon at the end of each year to launch it in the next, called “New Year.” They are nothing if not busy. I got two of these to review, which kept me busy: Barrell Bourbon Batch 27, and Barrell Bourbon New Year 2021.

Barrell Batch 27 is a blend of straight bourbon whiskeys distilled and aged using American white oak barrels. It’s a blend of straight bourbon distilled and aged in Tennessee, Kentucky, and Indiana, and a selection of barrels in a range of ages: 5, 6, 8, 9, 23, and 15 years old. The whiskies that make up Barrell’s New Year 2021 hail from more places—Kentucky, Tennessee, Indiana, New York, Texas, Wyoming, and Colorado—and slightly fewer ages: 5, 9, 10., and 11.

(I feel like I’m talking about listing ages of someone’s kids at this point. Anyway. Let’s get to it.) 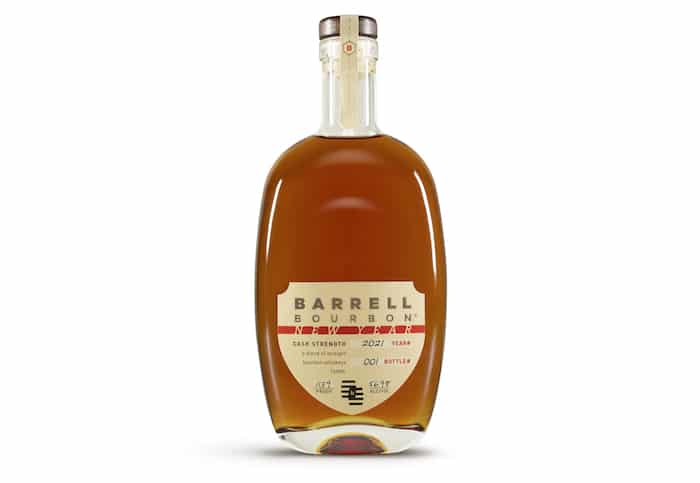 Palate: This is also shy on the palate. Barrell rarely steers me wrong, but I feel there’s simply too much happening in here. There are a lot of barrels in this Barrell. I fear they tried to do too much. It’s more the parts than the sum of the parts. It’s a bit overbearing. Barrell itself has called this a cherry bomb. I think they meant full of cherries, but it’s also like a firework, because it’s hot. There is an echo of cherry on my palate but it’s too fiery for my enjoyment. It kind of sums up 2020: Too much going on and not all of it great.

Nose: I am…not quite sure what to make of this. There’s a lot going on, but I also get a strong Elmer’s glue scent. There is also like a non-malty scotch smell to it. Rooibos tea, but not the tea itself—the smell of a mug of it the next day when all the tea has been drank but the bag remains in the vessel. Rosehips, too. It smells a little like the tea shop I used to go work in when you could work in outside establishments that were not your domicile.

Palate: Despite the odd nose, this is very smooth. The mouthfeel is luscious. And it has a sort of scotch but not peaty scotch on the aftertaste. Strong in barley, but not hefty. Tastes of grain but is not grainy. And it’s followed by a mild honeyed sweetness. Does it burn? Not really, though a couple later sips landed a little tingly on my lips. But this is lovely. I hope this reflects auspiciously on the just about 10 months left of this year. Maybe? Please? Yeah?

15
Shares
3.3k
Views
Share on FacebookShare on TwitterGet Our Newsletter
Get The Macallan® Rare Cask at ReserveBar. Shop now!