Editor’s Note: These whiskeys were provided to us as review samples by Andalusia. This in no way, per our editorial policies, influenced the final outcome of this review. It should also be noted that by clicking the buy links in this article our site receives a small referral payment which helps to support, but not influence, our editorial and other costs.

Peat is synonymous with smoke, but they’re not the same thing. Peat is the source and smoke is the by product. While Scotland has made historical use of peat smoke in whiskey, not everywhere is rich in peat bogs. And so, as whiskey makers always have, they improvise. Or they import.

Andalusia Whiskey Company has done both with the whiskeys I’m reviewing in this mix. Stryker has the more distinctly “Texan” source to its smoke. A state famous for its barbecue has applied that technique to the whiskey, and used wood smoke to dry the barley. They’re using a combination of oak, mesquite and apple to smoke with, to develop more flavor in the smoke.

The smoke element here is more varied than many peated whiskies are. The mesquite is the most distinct note, right up front, then mellows and becomes fruity. I was surprised by how mild the smoke comes across here, even with it creating the predominant flavors of the whiskey.

Revenant Oak is using a more standard smoke source: peat. This comes through very clearly in the more vegetal, earthy taste in the whiskey. And then the oak itself is of a specific nature as well. The name “Revenant” is a reference to this whiskey being aged in “dead” oak – barrels that had been out of use are brought back to age this product.

This one tasted a bit more like a scotch to me, but very softly so. Instead of coming across as a fully peated scotch, it tasted a little more like a coastal Highlands scotch with just a whisper of smoke to it. The charred oak barrel comes through, however, with some American weight to it.

Both bottles are also offered as specialty finishes. The PX sherry finishes are offered individually, while the Madeira finished bottles come in a set with the Andalusia Triple-Distilled Single Malt. 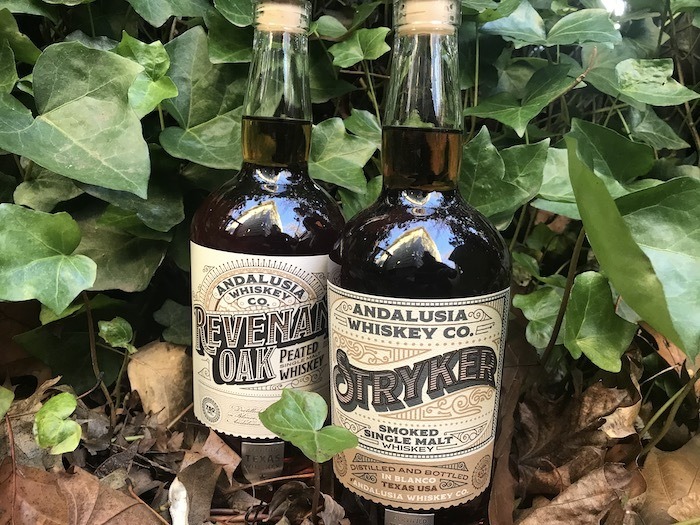 Appearance: Strong red hue, with muted gold highlights and a touch of green in the light.

Nose: A bit of saltiness becomes a whiff of fresh timber, then melts into creamy vanilla yogurt

Palate: Light texture, only a mild smokiness with mesquite being the first and most dominant note. Cereal grains follow, becoming apple cider on the end, with a short finish.

Final Thoughts: The Revenant Oak comes across as a marriage of styles, joining the flavors of American and Scotch whiskies.I typically prefer my peated scotch to have a lightness, but I really felt this still could have used more peat presence and more flavor.

The Stryker was also really very much defined by its smokiness – I didn’t get much from it other than that. A redeeming factor of that was the smoke itself. Wood smoke can be very one dimensional and flat, but the use of multiple woods allowed the qualities of each to shine through.