Editor’s Note: This whiskey was provided to us as a review sample by Wyoming Whiskey. This in no way, per our editorial policies, influenced the final outcome of this review. It should also be noted that by clicking the buy link towards the bottom of this review our site receives a small referral payment which helps to support, but not influence, our editorial and other costs.

Wyoming Whiskey started as a wheated bourbon distillery, releasing several iterations since 2012. Legend has it that their marketing department saw a small uptick in the public’s consumption of rye whiskeys and wanted to get ahead of that trend. Steve Nally (of Maker’s Mark fame), Master Distiller at the time, resisted. Rye is notoriously hard to work with, sticky and stingy with yields, and he wasn’t having it in his distillery.

Marketing kept up its campaign, and eventually Nally relented. He’d only make it at the very end of the distilling season, right before everything was cleaned and put to bed. His worst fears were realized, the rye foaming during fermentation and generally mucking up the operation. Still, he managed to put up 100 barrels of primarily rye, and 200 barrels of a ryed bourbon.

Nally soon moved on to Bardstown Bourbon and there was a new crew in Wyoming. The 300 barrels rested. Nancy Fraley joined up as Master Blender, found her way to the waiting whiskey, and was astonished by what she found – it was three years old and some of the best she’d tasted.

Marketing, naturally, was delighted. When they looked at the mash math, though, they were puzzled: it wasn’t rye whiskey they had in any of the barrels. The highest rye among them were only 48%.

Finally, the story goes, Marketing called up Nally and asked: “Why’d you only use 48%?” You know his answer, but I’ll write it anyway.

“Because I didn’t want to make rye.”

Plans are to make a true rye in the future. 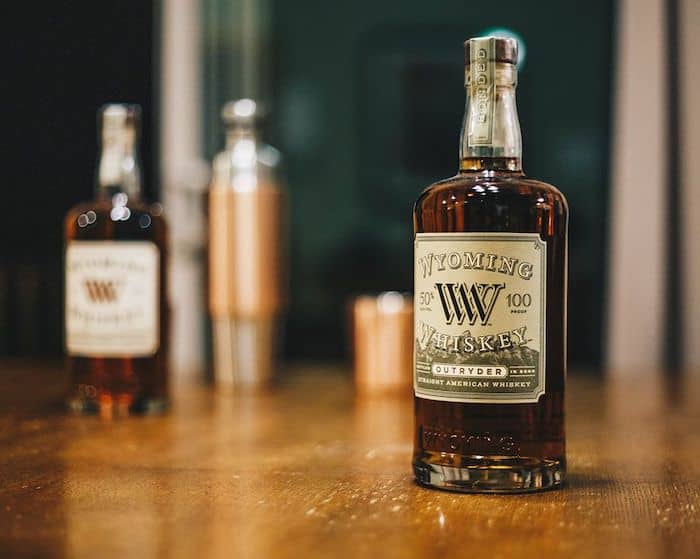 Appearance: Outryder is a medium copper in the glass, forming quick, fat tears.

Nose: This whiskey is sweetly fragrant and buttery, also powerfully spicy like sandalwood and cinnamon disks. There’s a floral undercurrent of garden roses and  fresh cut grass. As it rests, butterscotch dominates.

Palate: On the palate, it’s allspicy and sweet, with an apple cider freshness. Big stone fruit blooms on the mid-palate; toffee and black tea on the back.

Wyoming Whiskey Outryder is downright delicious. They keep releasing little caches of it, and the extra time this one spent in barrel was worth it. Would that this review sample was more than a promotional flask!