Editor’s Note: This whiskey was provided to us as a review sample by Woodford Reserve. This in no way, per our editorial policies, influenced the final outcome of this review. It should also be noted that by clicking the buy link towards the bottom of this review our site receives a small referral payment which helps to support, but not influence, our editorial and other costs.

This release of the Woodford Reserve Master’s Collection is the second of the year 2020. Previously brought to market was the Batch Proof from the distillery and I had heard that there was a second one for the year in the pipeline. The Batch Proof was a high-proof expression from Woodford at around 123 proof.

For this review, we have the Very Fine Rare Bourbon, which is a bit of a mouthful, though it describes the nature of the juice in the bottle. The 17-year portion of what’s in the bottle was initially put in barrel in Chris Morris’ first year as Master Distiller back in 2003. Thus, this one is in recognition of his beginnings there. As will happen, there’s some younger whiskey blended in to round out the flavors of the extra aging.

This release also recognizes Assistant Master Distiller Elizabeth Mccall, putting her name on the bottle in addition to Chris Morris. Moving forward, the Master’s Collection bottlings will feature both names, which I thought was pretty cool. Mccall is a second generation member of the distilling industry, with her mother being a sensory expert and making sure that the whiskey tastes as it should. One further fact about Mccall is that she is among the youngest female distillers in the industry.

“The name Very Fine Rare Bourbon is a nod to the descriptors used by our ancestors to auction highly-aged Bourbon barrel lots,” said Morris at the time this whiskey was released. “While Woodford Reserve will always honor the past, this Master’s Collection is about the present and future.”

This year’s expression marks the 15th release of the Master’s Collection and, starting with this expression, all future ones from this series “will focus on modern innovation by Morris and McCall.” What this specifically means is not entirely clear, but from a bottle design perspective the older shape, made to look like a pot still, is being changed somewhat to reference “the classic and iconic flask-shaped Woodford bottle.” 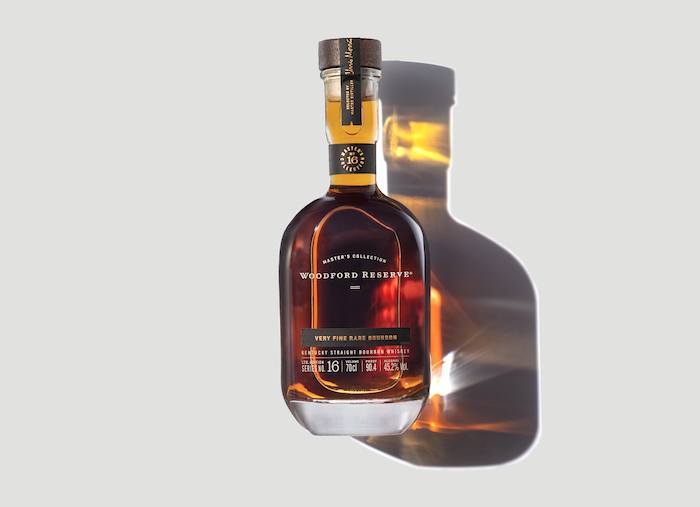 Appearance: I could describe the color on this in two ways. First would be a medium shade of henna. The second would simply be right in the mid-range between orange and red. In the glass, there were multiple thin legs, though it took a moment for them to express themselves.

Nose: Immediately hot and fruity for certain. After resting the whiskey for a moment, was able to discern sweeter aromas of orange and cherry, though more so in a hard candy form. It was bold but also quite pleasant, with the slightest hint of oak.

Palate: This was lighter bodied than expected, but packs in a good amount of flavor, especially as it finishes. There’s certainly multiple levels in the tasting experience. At the beginning, we find heat and orange marmalade, followed by Bing cherry and spice. The finish is compiled of amaretto cookies and oak, albeit subtle, but add a touch of water and they become more pronounced.

Over the years, from this series, there have been some favorites and others that were not so much. It's part of the innovation process. Not everybody is going to like your cocktail special of the day, or your recommendation of a spirit to a friend or customer. But that's how we learn and adapt. Alas, it's the difference of opinion that inspires dialogue.

At the end of the day, this is a great whiskey in the world of Bourbon. One of many great blends of the older whiskeys with the new. I always tend to go on about balance, but that's my palate. However, this one hits the mark. I like the fruit, spice, and sweetness. Not too much oak.

This is a talking whiskey. By that, I mean, have a pour or two with a friend and discuss opinions. I like it, but definitely took a while to get there to figure out what was going on with it.