Kentuckians are commonly known for three things: bourbon, basketball, and horse racing. Most people residing in the state would to tell you all three are inextricably linked to the people and persona of The Commonwealth of Kentucky.

If you were to take a day trip starting at Rupp Arena in downtown Lexington, Kentucky, you could take a short 20-mile trek along US-HWY-60 that would contain iconic locations of all three industries. This trip would begin at the largest basketball-specific arena in the United States, take you past Keeneland Racecourse, and, most importantly, end at Woodford Reserve Distillery in Versailles (Pronounced “ver-SALES.” Think the South, not France). When you visit Kentucky, the people there will assuredly let you know the meaning behind the other two locations are just as important as the bourbon distilleries dotting the state. Naturally, it is encouraged to enjoy any combination of the three!

In 2015, Brown-Forman’s flagship bourbon label began producing an experimental limited release collection known as the Woodford Reserve Distillery Series. Initially containing only two releases, it has since grown to include eight expressions, not all of which are bourbon. These 375ml specialty bottles are only sold at the Woodford Reserve Distillery Gift Shop and select Kentucky retailers. All bottles are periodically released and appropriately labeled with their vintage and other helpful information specific to that particular experimental small batch. This review focuses on the Winter 2017 release of Woodford Reserve Double Double Oaked. 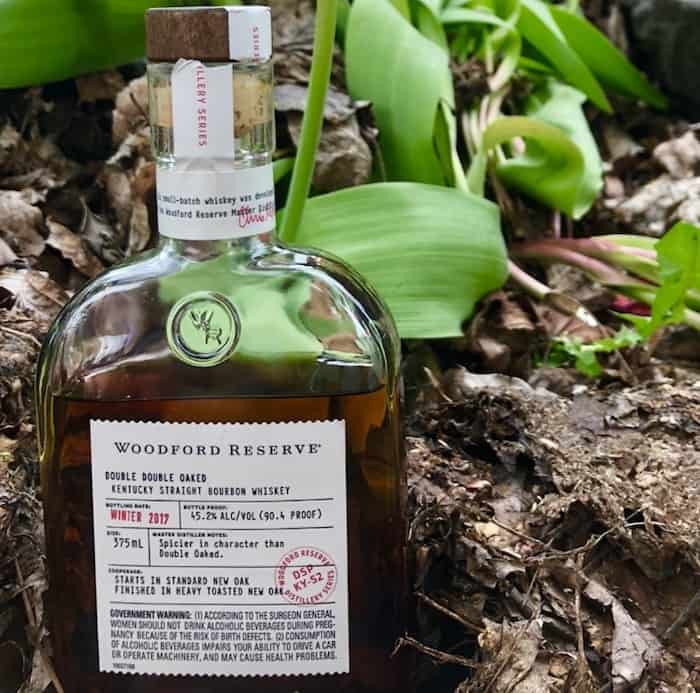 Vital Stats: Kentucky Straight Bourbon Whiskey aged in three different virgin oak barrels. Bottled at 45.2% abv with a mash bill of 72% corn, 18% rye, and 10% barley. Retails for $50 in 375ml bottles only in Kentucky.

Appearance: Amber in color like that of wildflower honey.

Nose: This whiskey will hit you with an initial burst of clove. Once the whiskey settles in a bit, salted chocolate and dark red fruits emerge.

Palate: Once again, clove. It really shines through in this whiskey. Dueling notes of banana and molasses give way to a finish that is dry before becoming buttery. Lingering hints of mocha are a nice reward at the end.

This is a fantastic bottle when taking all factors into account, despite being $50 for a 375ml bottle. The limited number of bottles, the unique experimentation, and the fact it is only available at the distillery or a handful of select stores makes it a worthy souvenir of any trip to the Bluegrass. This bourbon is a sipper if you like them on the spicy side of the spectrum, mellows out well with a couple drops of water.