Editor’s Note: This whiskey was provided to us as a review sample by Woodford Reserve. This in no way, per our editorial policies, influenced the final outcome of this review. It should also be noted that by clicking the buy link towards the bottom of this review our site receives a small referral payment which helps to support, but not influence, our editorial and other costs.

The Woodford Reserve Distillery Series features one-of-a-kind offerings that let the distillery experiment and get creative. The latest in the Distillery Series is the Chocolate Malt Whisper. Master Distiller Chris Morris claims it as a “happy accident” since the production of the straight bourbon immediately followed the 2019 Master’s Collection Chocolate Malted Rye. A “whisper” of that previous distillation was left in the still, lending this bourbon a hint of chocolate malted rye character.

What is chocolate malted rye? Malting can apply to almost any grain. It is a controlled germination process that produces enzymes that can later increase sugar availability in the mash for the yeast to eat. Roasting the malted grain is the process that makes it “chocolate.” As the color of the grain increases, the intensity of flavor also increases. Primarily, dark beers like porters and stouts use chocolate malt–but whiskey is beer all grown up, after all.

Morris and Assistant Master Distiller Elizabeth McCall are behind the Distillery Series selections at Woodford Reserve. Each year, they select three distinct whiskies for the series. Each select whiskey comes in a 375ml bottle rather than 750ml, and is available in Kentucky. 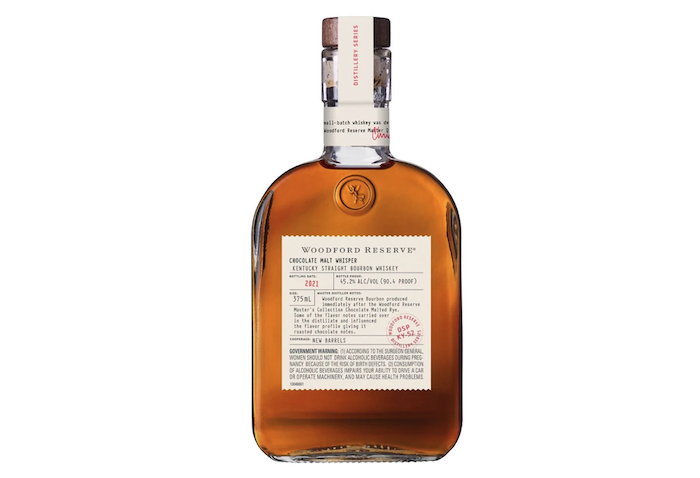 Nose: The nose is unlike any other Woodford Reserve I’ve had before. Bright red apple is unmistakable at the beginning, accompanied by cedarwood. In the next wave, cinnamon and spearmint come through, but the spearmint feels out of place compared to the fruitiness of the dram. Toward the end of the nose is lemon peel and almond extract. Overall, the nose of whiskey reminds me of Cherry Vanilla Coke.

Palate: The whiskey starts with dry espresso and cherry. Lemon peel comes through, as well, which provides that citric acid feel of Cherry Vanilla Coke. Bittersweet chocolate and crème de cacao are abundant. The mixture of natural and artificial chocolate is what creates the sweetness in the whiskey. Almond extract and cedar finish off the palate.

Each time I taste the Woodford Reserve Chocolate Malt Whisper, I get a different flavor profile. While I love a chocolate malt, the actual notes left on the palate waver between organic cocoa and fake sweet chocolate extract. I definitely recommend trying it and deciding for yourself. Sadly, the limited availability makes it a hard bottle to acquire. Hopefully, they try this “happy accident” again.