Moonshines’s popularity reached its peak during the days of Prohibition. It was a drink for scoundrels and rebels: a beverage that, by necessity, had to fly in the face of previous whiskey traditions and the law due to the ban on alcohol production. Bootleggers trafficked the illegal, homemade liquor across state lines to keep up with the demand. These days, moonshine (albeit a more legal version) has been appearing more frequently on liquor store shelves in response to a modern whiskey scarcity.

The upfront cost and time it takes to produce whiskey means it can take years before newcomers to the industry can bring their products to market. Coupled with the fact that, in the last 20 years, the demand for whiskey has begun to surpass whiskey producers ability to supply it, some newer distilleries have started producing moonshine as a way around this problem. Moonshine has the advantage of faster production times, with most moonshine sold right after distillation. Because it’s usually a clear liquor, moonshine has the added benefit of readily accepting different types of flavoring.

Willie’s Distillery, out of Ennis, Montana, clearly saw the writing on the wall when developing their their Montana Honey Moonshine, capitalizing on this whiskey scarcity and two growing trends in whiskey production: locally sourced ingredients and flavored whiskey. Montana Honey Moonshine is made “with three Montana grains and a special kind of molasses.” The molasses in the mash technically makes this moonshine a sort of whiskey/rum hybrid.

Flavored whiskeys can be a mixed bag, as whiskey distillers will sometimes mask a lower quality product with flavoring to make it more palatable. This also makes flavored whiskeys more marketable to a younger audience and people who aren’t typically into whiskey. While moonshines are typically clear, this bottle takes on a light amber hue due to the fact it has been aged for two years, as well as the addition of honey to the mix.

The question remains: Does this flavored moonshine justify the risks that it takes in bucking tradition? 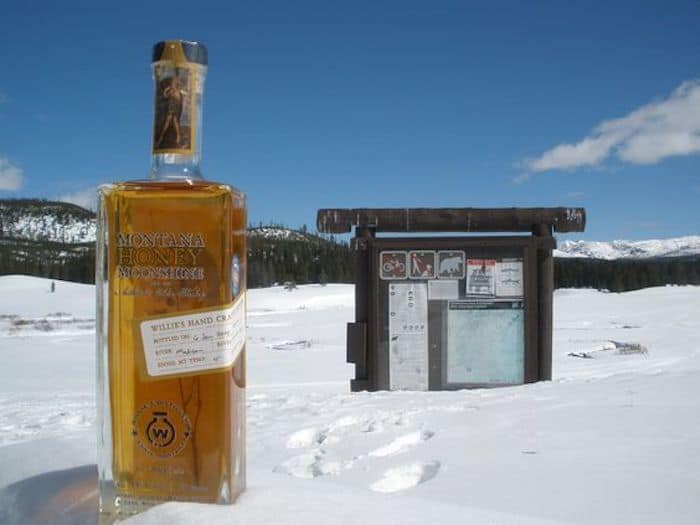 Nose: The honey is most present in the nose of this whiskey, which is to be expected, considering the name. The aroma is clear and shallow, devoid of alcoholic burn, with mild floral notes.

Palate: The flavor starts off smooth and almost imperceptibly light with the honey flavor from the nose joined by notes of caramel corn and magnolias. Surprisingly the honey doesn’t mask the flavor of the moonshine, but actually brings out flavors otherwise hidden by more alcohol forward natural moonshine flavor. While it’s almost alarmingly drinkable, there is a slightly unfortunate aftertaste: Because it lacks the body of an aged whiskey, the sugary sweetness lingers on the tongue longer than is pleasant.

Despite my initial reservations, the Montana Honey Moonshine is probably one of the best flavored whiskeys I've ever sampled. Unlike other flavored whiskeys the honey flavor doesn't seem like an afterthought, but essential to what makes this whiskey great. It’s hard to tell when the moonshine ends and the honey begins. For drinkers looking for something a little different, Willie Distiller's Montana Honey Moonshine is a solid pick.