Both rye whiskey and peated whiskey are acquired tastes. For a certain kind of person, there’s a suggestion implicit in that statement: What would happen if you combined the two?

In Pittsburgh, Pennsylvania, Wigle Whiskey took it upon themselves to find out. The distillery takes its name from Phillip Wigle, a Pennsylvania distiller who participated in the Whiskey Rebellion of 1794. Phillip was so inflamed by the newly levied tax on distilled spirits that he assaulted a tax collector, earning him a hanging sentence that was later pardoned by George Washington.

Wigle Whiskey specializes in whiskey—it’s right there in the name—and especially rye, a nod to Pennsylvania’s historic distilling roots. The state was once a major producer of rye whiskey, but Prohibition ended the industry virtually in totality. Fortunately, that wasn’t permanent. Thanks to Wigle Whiskey and others like them, that rich legacy of rye distillation is no longer totally lost.

Wigle’s products encompass a variety of different rye whiskeys, including some showcasing locally grown grain, as well as bourbon, wheat whiskey, flavored whiskeys, gin, vodka, rum, absinthe, liqueurs, and bitters. But even with that expansive portfolio under their belt, Wigle has found some new ground to break with one of their latest releases, Wigle Kilted Rye.

Wigle Kilted Rye is a malt whiskey made from a combination of regionally grown malted rye and malted barley that’s milled, fermented, distilled, and aged at Wigle’s distillery in Pittsburgh. After primary maturation in new charred American oak casks, it underwent a second “extended rest” in used quarter casks from the Laphroaig Distillery on Islay. Laphroaig is famous for its intensely smoky, peaty, saline spirit, making its used casks particularly active.

What kind of bottlefellows do rye and peat smoke make? Let’s find out. 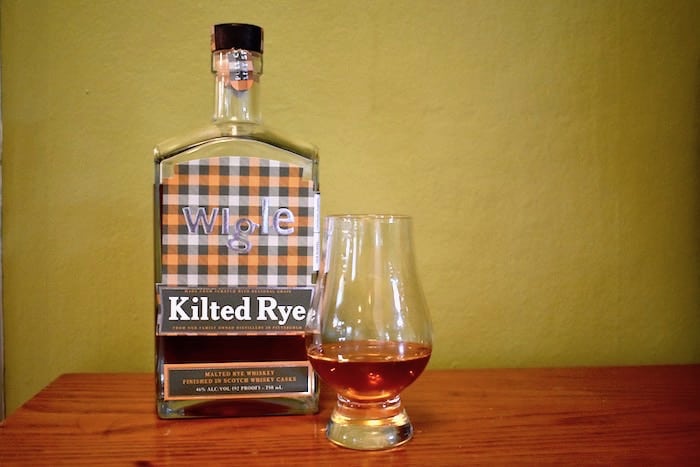 Palate: This whiskey kind of tastes like a Chicago dog, or like eating Vlassic Kosher dills in the cab of a truck while the driver smokes a backwoods cigar. It’s savory, earthy, and almost a little bit dirty. There’s plenty of smoke, to be sure, but paired with the rye and new oak it takes on a heavy, wet quality. The finish brings strong cinnamon, almost like biting into a cinnamon stick, plus a robust graininess.

This is a strange, evocative, intensely flavorful whiskey that I think could fairly be described as polarizing. I found myself wishing that the oak was a little bit less intense, but it’s a fascinating flavor marriage that works on a mysterious level.