The wheel has been around a long time now, understanding and respecting fire to be able to use its properties as a tool as well. These are ancient technologies that are very much still a part of our lives and it does not appear that we will be doing away with them any time soon.

Wooden containers as a means of transporting goods has been around since for much of recorded history, and the discovery of what happens when you add time and a soluble liquid to that container is also a time-worn practice that should keep us rooted in the past.

While it is no longer a practical means of transport, the desire to use these containers, barrels, and butts is very much still in demand in the spirit world. Barrels that once stored Spanish sherry are particularly sought after to be refilled with another spirit for finishing. While the Spanish had already been adding brandy to the used barrels, about 90% of the sherry that was produced was being exported to Great Britain in the barrels that they were stored in. This meant a lot of empty used barrels ending their working lives in England. It did not take long for whiskey merchants of the time to discover a use for many of these empty barrels.

These days, sherry is exported in glass bottles after it’s barrel aging.  But there is such a huge demand for oak barrels that have been “seasoned” by sherry that they have become their own commodity. Barrels are being sent to Jerez to be filled with different types of sherry for a time, emptied, and then sent back out to the spirit world to be used as part of a secondary maturation. This gives the spirit maker new aromatic properties to fine tune the flavor of their product. Depending on the spirit and the sherry that was once in the cask, complementary or contrasting notes may be introduced to add more balance and depth to the final product.

Wigle Whiskey out of Pittsburgh, Pennsylvania is adding their own spin on this tradition with the release of a Sherry Cask Finished Rye. 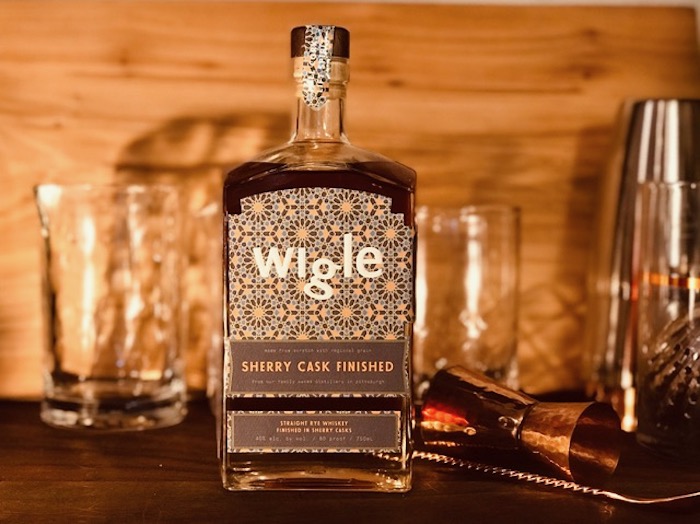 Appearance: Noticeable auburn transitions to slightly darker hues and an opacity as it sits in the glass, almost like turning leaves in autumn.

This is a unique and different approach to a tried and true method. Whereas other types of whiskeys and expressions might take you on a surprising journey, this is very much delivered as advertised. You get the spicy dryness of the rye, and the intense berry Pedro Ximenez influence right away and all at once.

That said, the taste doesn’t linger, but it does leave a distinct impression. This product is very focused and niche, and it would be interesting to see an even higher proof expression.

3.5
User Rating 5 (1 vote)
Sending
23
Shares
925
Views
Share on FacebookShare on TwitterGet Our Newsletter
Cheers to the Dads! Personalize a bottle of his favorite whiskey to create a modern gift for the modern man. Use code: FATHERSDAY20 for $20 off your next order of $100 or more at ReserveBar