Can you see the name of this brand and not have the 1990 2 In A Room dance classic “Wiggle it, just a little bit” in your head? I can not. I absolutely can not. Enjoy the three-decade-old earworm, GenX. But we are here to review a whiskey, not to talk 1990s hip hop.

Based in Pittsburgh, Pennsylvania, where whiskey production was a thriving business in the 1700s and 1800s, Wigle owes its name to distilling Pennsylvania pioneer Phillip Wigle. Founded in 2011, the family-owned distillery is also the first distillery in Pittsburgh since Prohibition. We have reviewed several of Wigle Whiskey whiskies on this site, such as the  Wigle Rye Rusky, the Wigle City of Champions Straight Bourbon, and a whole host of other Wigle creations. Some have been finished in sherry or mezcal or Scotch casks. Others are special releases. So many Wigles. What will the Wigle folks think of next? How about Wigle’s Roasty Straight Malt Whiskey, part of their ongoing Brewer’s Series collaborations?

Wigle brings together brews and barleys (and malts, oh my!) in their Brewer’s Series, which they introduced in 2015. Wigle works with the brewery on everything, from acquiring ingredients to developing the labels. The Roasty is one of their first organic and straight (aged more than two years) whiskies in this series; it’s a three-part collaboration with Full Pint Brewing Company, and artist Patrick Lee. This whiskey has been inspired by Full Pint’s Rye Rebellion Imperial Stout beer; Full Pint focuses on wheats, sours, and dark beers—although it appears the brewery has been closed since last spring. Roasty brings together a plethora—okay, six—organic malts with the intent of creating a roasted aroma and flavor. That’s a lot. Or is it? We have seen the influence of beer on whiskey can be marvelous: Black Butte Whiskey, I’m thinking of you. 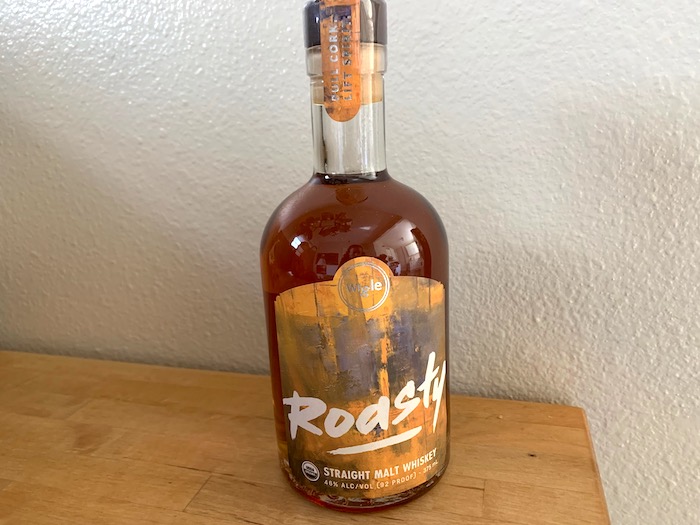 Appearance: Golden brown, like someone took a bowl of Golden Grahams cereal and polished it to a high shine. Biscotti before drying. A sandcastle during golden hour.

Nose: Knowing that this is called roasty, I went into this trying to sniff out those cooked scents. I don’t get anything that stands out. There is that cereal flavor again, and with all those different ryes, that is hardly surprising, although I can’t, like, pick out the black malt or the chocolate or crystal rye. I actually get a moderate to strong blueberry nose. Maybe a little milk chocolate, but it’s faint. I kind of joke sometimes about pencil shavings being a pretentious “on the nose” kind of flavor but darn it if it’s not there.

Palate: Sweet and unusual on the palate. Banana. Pungent ginger. Grain. Honey. Rye, but not enough to give it that satisfying chew. While the nose blends together in a melting pot, this is more like a salad. There are lots of components, but it’s a little jangly to me, like I taste lots of different things versus a single whiskey experience. There’s a lot of barley! And cereal! Don’t get me wrong, I love me a darn good salad and barley and cereal but this whiskey isn’t cohesive. It is not a smooth meld. It’s cool. And it’s weird. It’s a collector’s item, maybe, if you like offbeat partnerships or love wacky beer. But it is not my favorite or even close. It tastes like I did a shot and chased it with a beer.

I’d give this to someone who likes malted flavors and cereal and, also, beer. Actually: If you are a person who’s out of milk and puts beer in their cereal in a pinch (or even not in a pinch), have I got a bottle for you!