Located in the heart of the famed Whiskey Rebellion territory in Western Pennsylvania, Wigle Whiskey is the first distillery to open its doors in Pittsburgh since Prohibition. The distillery prides itself on producing 100% of their spirits on-site and using locally sourced, organic ingredients. Across the board, they were also the most awarded distillery at the American Craft Distillers Association Conference in 2015 and 2016. Much like those who fought in the whiskey rebellion, Wigle takes whiskey very seriously. Consequently, we get to try truly unique spirits, like their Malty Baere.

Released as part of their Brewer’s Series, Wigle’s Malty Baere features “Wild Angels” yeast from Draai Laag Brewing Co., as well as four malted barley varieties. Many bourbon distilleries maintain their own yeast cultures, which they say contribute to the flavor of the spirit, as a previous Whiskey Wash article explains. This particular type of yeast is a wild yeast native to Millvale, Pennsylvania.

“Normally we ferment our mashes with yeast that is cultured in a laboratory and is sent to us in sterile vacuum-sealed bags,” the company explained on their website. “The “Wild Angels” yeast was brought to us from Draai Laag in four 5gal buckets that were poured directly into the mash tun.” 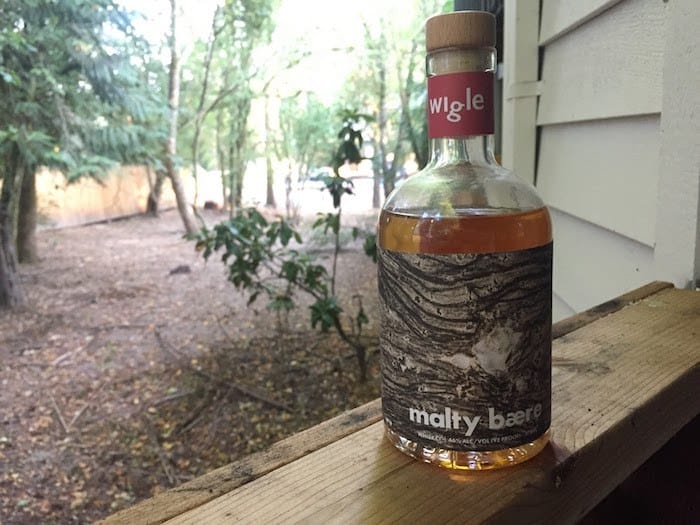 Vital Stats: This spirit is aged in toasted American Oak barrels for two and a half years. Wild Angels Yeast is used in the distilling process, and the mash bill contains four types of malted barley. The bottle is 375ml and costs $34.

Appearance: The whiskey is a light-golden hue, and has sticky legs that build up on the glass like a whiskey fortress.

Nose: Passionfruit and mango stand out in the scent, and are complemented by the smell of toasty nutmeg and butterscotch candies. The smell is very complex, but not uninviting.

Palate: This whiskey is so unique that I’m finding it almost impossible to compare it to any kind of whiskey I’ve ever tasted. The notes of tropical fruit are at the forefront of flavor, melting into caramelly goodness and fresh-baked sweet rolls. It goes down so smoothly; it’s almost too easy to drink. Even the sweet lingering after-taste is delightful. It’s not as overpoweringly sweet as some malt whiskeys, and the tropical fruit flavors set it apart from other malty spirits.

If you aren't a fan of sweeter whiskeys, this probably isn't for you. However, I really enjoyed the unique flavors offered by the Wild Angels yeast and the toasted Oak barrels. I plan on keeping this whiskey on reserve for taking teeny tiny sips on special occasions, because I can't Baere the thought of not having this bottle in my pantry. Ha.