WhistlePig The Boss Hog VII is a whiskey for the beast, the boss hog in all of us. It’s a premium, barrel strength rye that’s part of this distillery’s premium yearly release series. For 2020 it took the form of a rye whiskey that’s been aged for 17 years in American oak and finished in Spanish oak and also South American Teakwood casks. The nod to Magellan in its name (Magellan’s Atlantic) is because this expression is ““inspired by the first recorded circumnavigation of the earth.”

Rye whiskey is thought to be the original drink of America since President George Washington was distilling rye at Mount Vernon. Master Distiller, Dave Pickerell, formerly of Maker’s Mark, came to WhistlePig to make the best rye whiskey, it is said, known to man. He started by bringing a 10-year old 100 percent rye (Monongahela style) from Alberta Canada.

Now, WhistlePig has its renovated farm and distillery that was completed in 2015. WhistlePig “became one of the few whiskey companies to house every aspect of the whiskey making process in one place, from harvesting our rye fields, mashing, fermenting, distilling, barreling, aging, and bottling.” 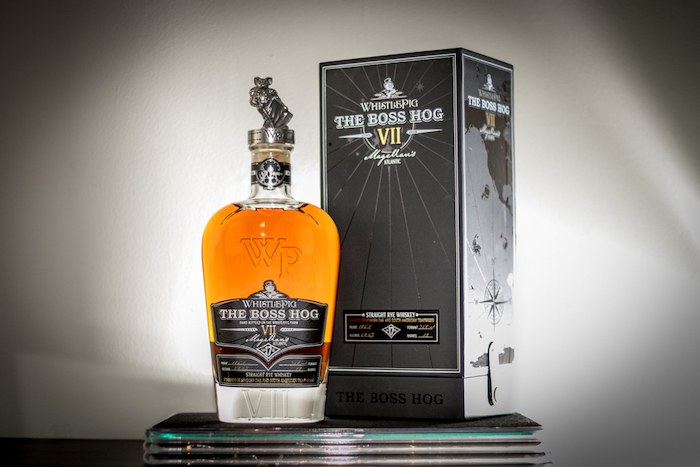 Vital Stats: 105.1 proof. Single barrel. Barrel strength Rye. After seventeen years of slumber in American Oak, it first encounters new Spanish staves from the mountainous forests of northern Spain; a cask nearly impossible to tame yet well worth the effort. Crossing the Atlantic the whiskey finds its finish in fragrant South American teakwood. Distribution to over 25 states (and growing). $535.

Appearance: The box is just as impressive as the bottle. There’s some weight to it. Polished mahogany. Slow, thin fingers.

Nose: The first thing I noticed was that it wafted of fresh baked goods, like a french bakery shop. The nose is so wonderful with cinnamon, brown sugar, and nutmeg. It reminded me of a coffee cake or custard. There could also be a full spice cake or snickerdoodle in that big bottle.

Palate: The flavors were just as nice as the nose. WhistlePig The Boss Hog VII is very bright, smooth, and buttery. It tastes of orange rind, vanilla, cherry, and sweet almonds. It’s quite a lovely dessert flavor but not too sweet in my opinion.

The flavors are very mellow and you wouldn't realize the proof because the alcohol does not overpower the flavors. It honestly tastes more like an 80 or 90 proof rather than over 105. It's so smooth and buttery. There's a medium mouthfeel that lingers and warms.

It's one of the few whiskies that I would want to drink over 100 proof. This is a very sippable whiskey with it's baked goods flavors.

At around $500, this is a very expensive whiskey so it won't be for everyone. It is a solid investment for the collector or the whiskey aficionado. If you're just starting out with whiskey but want a nicer bottle, perhaps you can start with some of the others WhistlePig offers. I don't think you can go wrong with any of their whiskey.