Editor’s Note: This whiskey was provided to us as a review sample by WhistlePig. This in no way, per our editorial policies, influenced the final outcome of this review.

The Boss Hog #6! Koji fermentation! Finished in an 11 year umeshu plum cordial barrel! There sure is a lot going on with the latest Boss Hog release from WhistlePig in Vermont. The story began with the purchase of 500 acre farm in 2007 in Shoreham, Vermont. Then add master distiller David Pickerell. Finally, the challenge of making some great rye whiskeys and thus far WhistlePig has done pretty good, having won a “Best in Show” title in 2017 during the San Francisco World Spirits Competition among other accolades.

This is the first Boss Hog release since Pickerell’s passing in 2018. The series is one of experimentation and showcasing the different possible expressions of rye whiskey. Previous versions include The Spirit of Mauve, finished in apple brandy barrels and the Black Prince in Armagnac barrels.

Koji fermentation, what? Koji is a Japanese term for cultured grain. Usually, it is used in the process for making miso, and involves the spores of Aspergillus oryzae for fermentation. The result tends to be a sweet and fragrant cultured grain. Japanese chemist, Jokichi Takamine, was the pioneer who introduced koji fermentation to the American whiskey industry in the 19th century.

Next up, the umeshu. It is a Japanese liqueur made by steeping fresh Japanese plums (ume) in shochu/white liquor and sugar. The result being a liqueur with a blend of flavor notes, both sweet and sour. WhistlePig is one of the first American distilleries to use umeshu barrels and this release is a collaboration with the Kitaya brewery on Japan’s Kyushu island.

“It was an honor to work alongside the team at Kitaya to bring this collaboration to life in the form of the first American whiskey finished in Japanese umeshu barrels,” said WhistlePig CEO Jeff Kozak at the time this whiskey was released. “With the introduction of The Samurai Scientist, WhistlePig continues to pave the way for innovation across the rye category. Dave Pickerell committed to five promises for The Boss Hog, including being distinctly unique from anything we’ve done before. He had a thirst for exploring and trialing techniques from around the world, and Takamine was likeminded in propelling whiskey innovation across continents. This vision continues to drive us to explore beyond the limits of American Whiskey.”

“We finished one of our oldest whiskeys in barrels that held Kitaya’s eleven-year-old umeshu,” addedWhistlePig master blender Pete Lynch. “With umeshu being an intensely aromatic spirit, it does not take long to impart deeply complex flavors. Each barrel of The Samurai Scientist is bottled at proof. Only 90 barrels exist and each bottle notes the barrel number and proof, ranging between 120 – 122.” 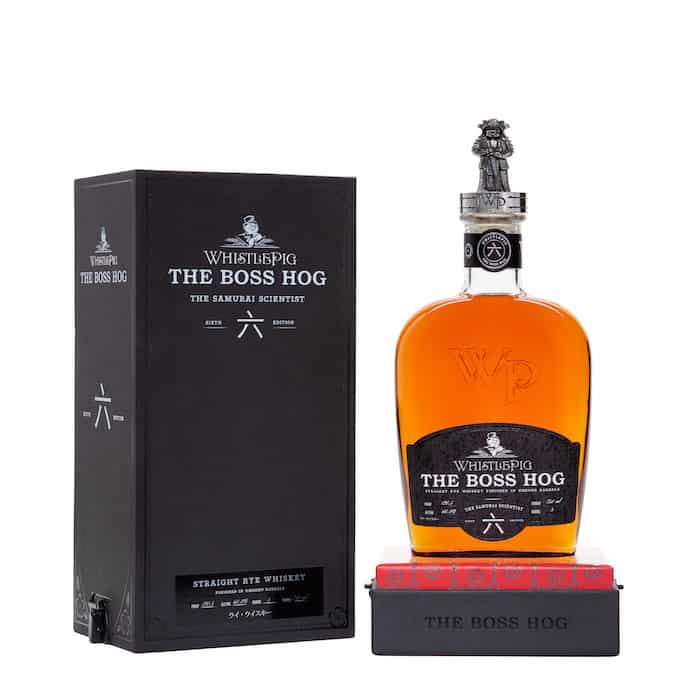 WhistlePig The Boss Hog: The Samurai Scientist (image via WhistlePig)

Nose: Barrel strength, so a lot of alcohol up front. Beyond the initial hit, could pick up a hint of citrus, as well as toffee and clove.

Palate: A heck of a lot of citrus and rye spice. In the middle found notes of tobacco and baking spices, with a long finish of caramelized sugar and oak. This one was really complex, offering a bouquet of flavors throughout.

I've had other expressions of Whistlepig, but had yet to delve into the Boss Hog series. This one did not disappoint! There's a lot going on, which made the Samurai Scientist an enjoyable tasting experience. Multiple layers of flavor and a long finish at barrel strength.

Unfortunately, the price point is expensive at around $500 for a bottle. It's really, really tasty, but perhaps not worth going to the store for purchase. I would certainly seek this one out at a bar and hang out with a pour for a while.

4.5
User Rating 2.97 (74 votes)
Sending
120
Shares
15.2k
Views
Share on FacebookShare on TwitterGet Our Newsletter
Cheers to the Dads! Personalize a bottle of his favorite whiskey to create a modern gift for the modern man. Use code: FATHERSDAY20 for $20 off your next order of $100 or more at ReserveBar