WhistlePig’s dream of creating a grain-to-glass whiskey was actualized in 2017 with their FarmStock Rye. While the first FarmStock Rye used twenty percent of whiskey made from grain on their 500-acre farm, the WhistlePig FarmStock Beyond Bonded Rye is made entirely from grain grown in the North Orwell 1 field on their farm. This new expression slightly pushes the boundaries of bottled-in-bond, as it comes in at 100.1 proof.

The Beyond Bonded Rye is an experiment, but there is no word if WhistlePig will increase the ABV as Orphan Barrel did with their Rhetoric 20-year to 25-year series. Although WhistlePig has been distilling their own whiskey for a few years now, hybrid ryes are not quite leaving the distillery’s portfolio yet. WhistlePig Distiller, Emily Harrison, does not shy away from discussing the difficulties in distilling rye grain, but she assures great things are in development.

In May, at the Mecum Spring Classic, Barrel No. 0001 of the WhistlePig FarmStock Beyond Bonded Rye was auctioned off. The winning bid of  $100,100 went to FarmAid. Of the 24 barrels of rye produced, one of the oldest barrels in the bunch matured for 4 years, 8 months, and 14 days. Each bottle of the FarmStock Beyond Bonded Rye has a QR code on the label so WhistlePig lovers can read thirty facts related to their individual whiskey.

We know the Vermont estate oak barrels impact the flavor of WhistlePig’s rye whiskey, but let’s see how how the WhistlePig FarmStock Beyond Bonded Rye tastes made from 100% farm-grown grain. 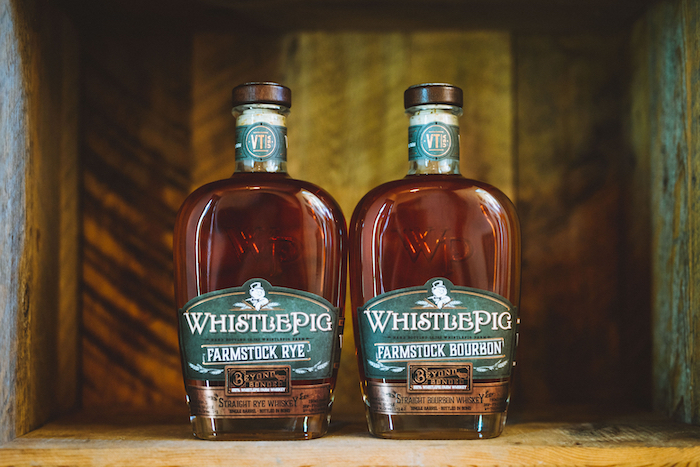 Nose: The nose is incredibly warm and cozy, and the dram just screams autumn. It starts with seafoam toffee and hot butterscotch sauce. The grain comes through with cinnamon reminiscent of fresh-baked cinnamon rolls. Allspice and clove linger with tobacco. A touch of spearmint comes up in the background.

Palate: The mouthfeel is velvety with clove and cinnamon slowly heating up the tongue. Brown sugar gives sweetness to the palate, and cereal adds a chewiness. Towards the end, tobacco and leather do not overpower the baking spices. The dram does have a slight rubbing alcohol finish, but it dissipates with mint coming through.

The WhistlePig FarmStock Beyond Bonded Rye is a marvelous debut of grain-to-bottle from the distillery. This rye is so different from any of WhistlePig’s other ryes that it will make you excited to see how they continue on making whiskies with 100% of their distilled liquid. I don’t know if I’m just looking forward to leaves falling on the ground, but this will be my go-to for the coming autumn season. The spiciness from the rye varietals gives depth to the dram.