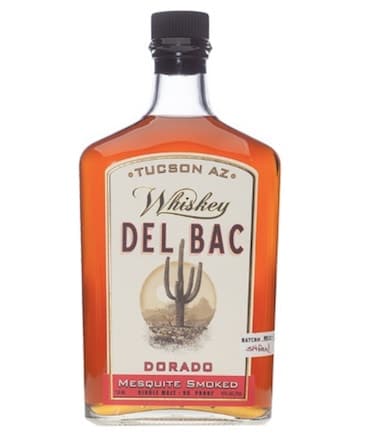 Inspiration struck distiller Stephen Paul once while swilling Scotch and standing over a barbecue of mesquite scraps. Native to the Southwestern United States, the mesquite tree’s wood has long been favored as a barbecue fuel for the distinctive sweet-smoky flavor its smoke imbues. Stephen began to fantasize about what might happen if you swapped peat fuel with mesquite in the malthouse, and then he decided to learn how to make whiskey.

In 2011, Hamilton Distillers was born in Arizona, and has since then put out a line up of three original whiskies under its Whiskey Del Bac brand. Dorado stands out from its siblings, the Clear Mesquite Smoked and the Unsmoked Classic, as the full embodiment of the company’s vision: sweet, dessert-y single malt.

In pursuit of the great Scottish tradition of whiskey-making, Hamilton Distillers prides itself in malting, smoking, mashing, fermenting, distilling, barreling, and bottling all under one roof in Tucson, Arizona. From humble beginnings drying 70 pound batches of malt in a homemade smoker, Stephen and co. have since built a custom malthouse featuring a two-tank system that can steep, germinate, and dry 5,000 pound batches in a highly-controlled fashion.

The Whiskey Del Bac Dorado tastes like if beef jerky and barbecue had a whiskey love child. This Southwestern twist on the single malt classic is just interesting enough to be worth your time. The name “Del Bac,” by the way, is a combination of Spanish and English, meaning “of the place where the river appears in the sand.”

Appearance: Drawing on its rustic character, the Dorado is a thick dusty umber—the color you’d hope to spy in a cowboy saloon. The legs are thick and meaty.

Nose: The Dorado delivers a warm aroma, syrupy and smoky, and its depths are ripe with hints of peppers and cherries.

Palate: A melody of sweet barbecue plunges into a throaty burn, pulling the punch on smokiness for the baked-in quality of desert heat. Underneath lies the familiar roster of caramel and vanilla, with notes of peppers, cherries, and a beef jerky afterthought.

The Whiskey Del Bac Dorado is unique and genuine, a homespun success. Not for mixed drinks; this should be enjoyed as it is and where it was conceived: around the backyard barbecue.