Editor’s Note: This whiskey was provided to us as a review sample by Whiskey Del Bac. This in no way, per our editorial policies, influenced the final outcome of this review. It should also be noted that by clicking the buy link towards the bottom of this review our site receives a small referral payment which helps to support, but not influence, our editorial and other costs.

As grateful as I am to emerge cautiously from pandemic mode, I must also acknowledge the added fortune of doing so at the beginning of summer. While cautiously getting my sea legs (as it were) back under me of a social existence, I am taken aback at some of the sensations that I had not given proper notice before. How the crack of a baseball bat sounds in person. A picture of the outdoors sure is pretty, but cannot compare to the feel of the breeze and the sound of nature letting you in on its song. It may, however, be my stomach that is most excited, as the longer days and warmer temperatures may bring on the alliterative pastimes of baseball, beaches, and backyards,  the “b” that I most associate with the sunshine is barbecue.

The barbecue is also where the story of Whiskey Del Bac begins. Stephen Paul was a furniture maker, barbecuer, whiskey fan, and someone who is proud and very fond of where he and his family live in the Sonoran Desert of southeastern Arizona. Taking all of these things into consideration, add some ingenuity and trial and error, and you may end up with a distinct whiskey to call your own and share with the world.

Smoke has a long history with whiskey making. While the subject of terroir in whiskey remains an open one, we are aware of how different woods create different smokes that can have tremendous impact on the flavor of food that might be cooked with it. So it would stand to reason that wood that is distinctive to a certain region and is known to produce a distinctive smoke should give a distinctive whiskey.

Whiskey Del Bac began with the idea of using mesquite in their kilning process to capture some of the personality of the Southwest. They continue with that notion with their Distiller’s Cut special release. They state that this is an exercise in the art of blending. Past expressions have included blends of smoked and unsmoked whiskeys and finishes in ex-Cognac, Madeira wine, and extra añejo Tequila barrels. The summer 2021 release showcases their mesquite-smoked single malt finished in French Sauternes barrels, bringing together another flavor with a distinct method and history. 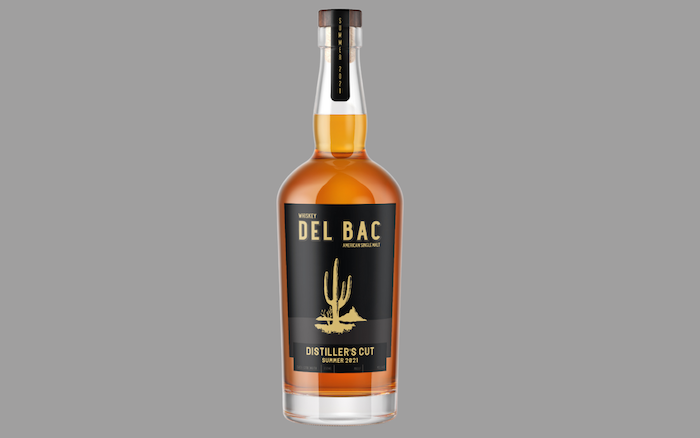 Appearance: Clear with a sepia to tawny tone. Tightly grouped tears forming on the side of the tasting glass.

Palate: More fruit right away, but this time it is more of the stone fruit variety. Jam, with a slight black pepper sensation. Faint smoke, but a sweet smoke akin to candied bacon. A farmers market of flavors.

Definitely enjoyable. It starts off seeming to want to go in a breakfast cereal direction (like a of a lot of young American single malts), but the sweetness of the mesquite smoke and the influence of the Sauternes cask seem to calm it down and give it some depth and personality. Summer is right on the label and the barbecue awaits. Enjoy the sunshine.