Editor’s Note: This whiskey was provided to us as a review sample by Whiskey Acres. This in no way, per our editorial policies, influenced the final outcome of this review. It should also be noted that by clicking the buy link towards the bottom of this review our site receives a small referral payment which helps to support, but not influence, our editorial and other costs.

Illinois is home to great breweries and distilleries. Alcohol runs deep through the state’s history, and Whiskey Acres Distilling Co. has brought back its family tradition of distilling spirits. The distillery was founded in 2013 just two years after fifth-generation farmer Jamie Walter saw opportunities to expand the farm in a different market. Whiskey Acres Distilling Co. makes vodka, bourbon, rye, and now their first batch of Bottled-in-Bond bourbon out of grains completely grown on their farm.

We all know it takes grain to make whiskey, and these days it seems that whiskey makers and distilleries won’t let us forget it. With slogans like, “from grain to glass” and “made from our grain, our wood, our water” floating about the industry, Whiskey Acres Distilling Co. brings us their version, “from seed to spirit.”

Usually, it comes down to marketing and the perpetual bombardment of whose whiskey is the most carefully crafted for quality, but on the other hand, Jamie Walter puts it into perspective, “There is a tremendous shift in people wanting to understand where their food and drink comes from,” he says. “The fact that we grow our own grains gives people that sense of connection.”

Just as grain is important to making whiskey, so is water. However, when I think of water sources, Illinois is not a state that comes to mind. Deep under the soil of the farm at Whiskey Acres Distilling Co. lays an aquifer, but it’s not just any ordinary water source. The aquifer is limestone.

When people think of limestone, they usually associate it with Kentucky. After all, bourbon brands made there boast about their magical water. Now it’s time to separate the grain from the chaff and determine if Whiskey Acres Bottled-in-Bond Bourbon can stand out against other BiB Kentucky bourbons. 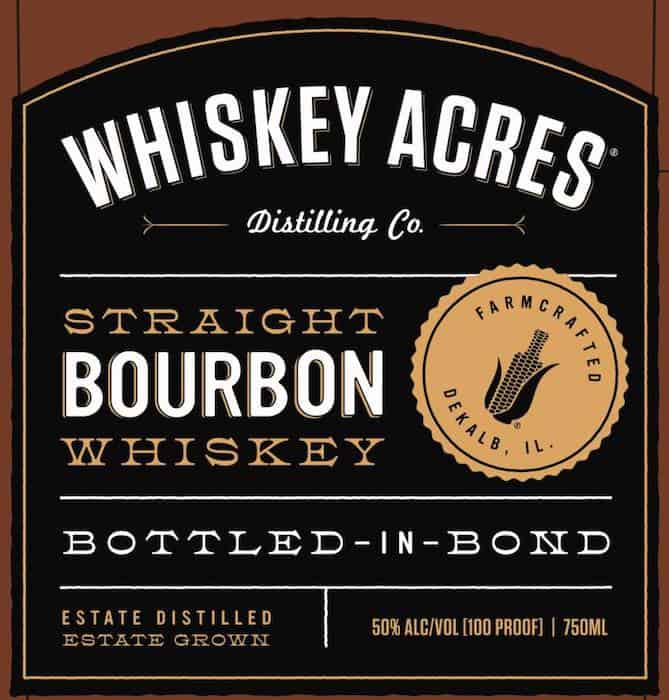 Non-chill filtered and cut with limestone filtered water. Seven barrels blend together to make this limited release. Only available in Illinois at the moment. 750ml $50.

Appearance: Amber with glints of copper.

Nose: At the forefront of the dram is a touch of acetone, but it doesn’t singe the nostrils. It’s quite different on the nose from other BNB bourbons. It has earthy undertones with lots of straw and grass. Granny Smith apple with cinnamon notes brings memories of apple turnovers.

Palate: The mouthfeel is soft, but quickly burns on the back end. However, it doesn’t drink like it’s bottled-in-bond at 100 proof. The oak is dry and young. I have neutral feelings about the bitterness. The green apple from the nose is present, but unlike an apple turnover, it’s not sweet. It warms the belly evenly without burning.

On the back end, allspice, clove, and cinnamon mix with tobacco. The palate is complex; it leaves me baffled and confused, but I think it’s because it tastes like I am drinking the liquid form of a Djarum clove cigarette.

For the inaugural debut of Whiskey Acres Bottled-in-Bond Bourbon, it is quite alright. It's very different from other BNBs on the market. I would drink it with club soda, ginger ale, or even with a splash of Simply Apple.

If you like baking spices, but not with a heavy burn, then you'll enjoy this bourbon. Looking forward to seeing the growth of this distillery, and to the next the batch of the Whiskey Acres Bottled-in-Bond Bourbon. I'll definitely add them to my list to visit the next time I visit friends in Chicago.