Editor’s Note: This whiskey was provided to us as a review sample by Westland. This in no way, per our editorial policies, influenced the final outcome of this review. It should also be noted that by clicking the buy link towards the bottom of this review our site receives a small referral payment which helps to support, but not influence, our editorial and other costs.

Before the craziness of current events banned all social gatherings, this past January Seattle-based American single malt specialist Westland Distillery hosted its 6th annual Peat Week: a week-long festival to celebrate peated whiskies and all things smoky. This year featured round table conversations with local chefs about the role of smoke in food, plus a cocktail making contest. The event culminates every year with the release of Westland’s annual limited Peat Week whiskey.

Westland master distiller Matt Hofman co-founded the distillery when he was just 21. After beginning to make whiskey in his dorm room as an undergrad at the University of Washington, he went to Scotland to further his whiskey education. His studies there fueled his interest in peat. Hofman loved peat so much, the distillery has even sourced its own bog near the Puget Sound south of Seattle, where they harvest local peat.

If you aren’t familiar, peat is a porous soil-like material that can be found in bogs, primarily in the Northern hemisphere. Peat is formed over thousands of years and found deep underneath wetlands. It’s made of decomposed moss, leaves, grass and other organic material that holds together like bricks. It can be used to clean up oil spills, as a fertilizer, or in whiskey production.

The environment in a bog is quite unique: plant matter decomposes without oxygen in fairly acidic water, making it good for preservation. In fact, ancient, perfectly preserved bodies have been found in bogs in Europe and even Florida. Hofman’s peat source didn’t have any ancient bodies, but they did find old beaver dams and a layer of volcanic ash, likely from the eruption of Mt. Mazama, which created Crater Lake in Oregon.

Hofman says he’s hoping to use the local peat they harvest to instill a true Pacific Northwest terroir to the whiskey. This all being said, the whiskey I”m reviewing this time around makes use of Baird’s, a heavy peat malt imported from Scotland. The spirit was aged in new, un-charred French oak casks for 50 months for being bottled at 60.4% ABV. 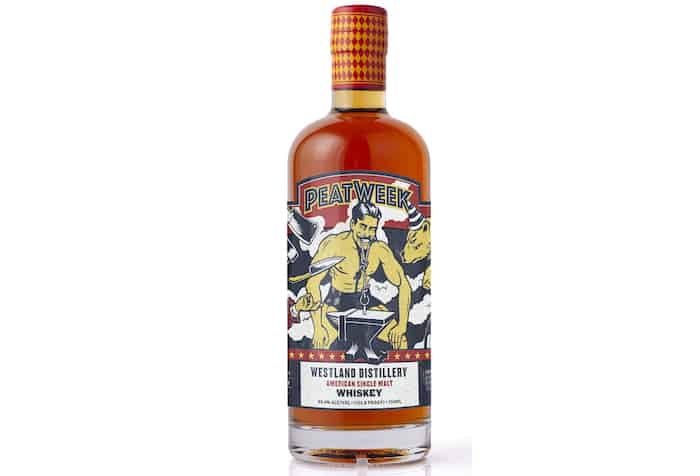 Appearance: Bright orange, with tangerine and golden flecks. It’s not very viscous, and there’s almost no legs to speak of.

Nose: Orange peels, heavy smoke, pine. It’s very earthy, leathery but also bright and airy. Sweeter notes of vanilla and lemongrass are subtle, but not lost. The nose is balanced, smoky and citrusy.

Palate: Smoke, smoke, smoke, more smoke. I was surprised that the mouthfeel is really light. Finish is long and hot! Cinnamon sticks, leather, tobacco and vanilla stand out in the body along with dirt, grass, slate and clover. The peat really is the star of the show. It tastes like a bog, wet and muddy.

This definitely isn't an entry-level peated whiskey. It's got heavy, heavy smoke, but a light mouthfeel. Once its sat for a bit and opened up, it's nice to sip straight or on ice.