Editor’s Note: This whiskey was provided to us as a review sample by Watershed Distillery. This in no way, per our editorial policies, influenced the final outcome of this review. It should also be noted that by clicking the buy link towards the bottom of this review our site receives a small referral payment which helps to support, but not influence, our editorial and other costs.

Watershed Distillery, located at the epicenter of Ohio’s craft distilling scene in Columbus, has made a big impact by sweating the small stuff – small producers in particular.

When Greg Lehman and Dave Rigo founded Watershed in 2010, they were made intimately aware of the onerous restrictions that Ohio law placed upon smaller operations looking to grow their brand. Working together with other craft distillers, including their near-neighbors at Middle West Spirits, Lehman co-founded the Ohio Distiller’s Guild to push legislation making it easier for smaller scale distilleries to gain consumer recognition and distribute their products. The proliferation of microdistilleries in the state is testament to their success.

In the years since, Watershed has expanded their operations, but it has not changed their approach of celebrating the small details that make all the difference in distillation. They remain particularly vocal about sourcing their materials, even their barrels, close to home.

Watershed produces a wide range of spirits (from gin and vodka to a bottled Old Fashioned) but the most relevant to us today are their apple brandy and range of bourbons. Their Barrel Strength Bourbon is labeled at six years, the oldest age statement carried by any Watershed product. The copper pot-distilled whiskey is some of the last of the distillery’s original mash bill containing corn, wheat, rye, barley, and spelt. It spent its first four years in virgin white oak barrels, and was then finished for 34-45 months in casks which previously housed Watershed’s apple brandy. 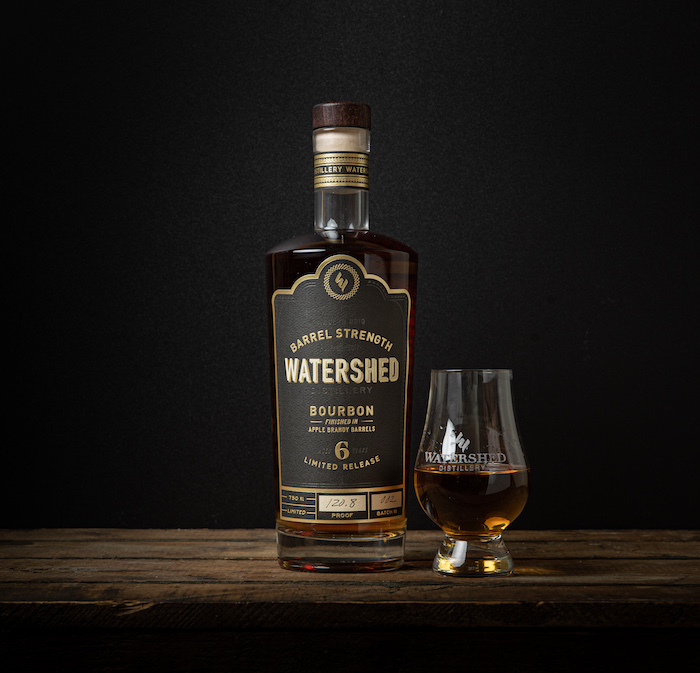 Appearance: It pours a viscous amber.

Nose: The aromas from the oak barrel come in strong here, accompanied by the rich sweetness of medjool dates.

Palate: It’s hot, but it drinks smoother than the proof. There is a lot going on here. I even thought it was a bit “busy” at first, until I found it opened up really nicely after sitting in the glass for a few minutes. A couple drops of water could be added for a similar effect. There is sweetness here, but it plays in a supporting role to flavors of dried dates and figs with some spice moving into a light, herbaceous quality. The tannins in the finish linger for a while, giving one time to parse out the individual notes in a complex flavor.

This bottle gives you a sense of what Watershed is about. It is complicated, singular, even a bit weird at times. The unorthodox mash bill and cask finish make this bottle truly unique. It may not be for everyone, but that adds to its charm. Most of the press for this expression stresses that quantities are limited and if you have the opportunity it’s absolutely worth trying. Despite the fact that I really enjoyed the uncommon flavors in this bottle, I’m not sure whether I’d recommend it if the limited availability of bottles requires you to chase the bottle above the retail price point on secondary markets, unless you’re quite sure you want something different.