The term “organic” is often thrown about with little insight into the impact of the process or what organic means as it pertains to the production of whiskey. When venturing into organic whiskey distilling, everything becomes a bit more complicated, as the distillers must adhere to strict guidelines set by legislation that states only certified producers can take advantage of the organic label. Requirements vary depending on location, and production standards are set for growing, storage, processing, packaging, and shipping. These extra steps are imperative to avoid the “false assurance of quality,” or the mislabeling of the product to appeal to the niche market.

Warfield Distillery opened in 2015 in Ketchum, Idaho, and immediately began working with organic ingredients within the production of whiskey, gin, and vodka. Co-founders Alex Buck and Ben Bradley decided from inception that Warfield Distillery would create spirits without genetically modified enzymes and yeasts, and would avoid pulling from crops that use pesticides or chemicals.

Over the course of three years, Warfield Distillery expanded their system to be able to produce a greater amount of whiskey. Originally, the outfit produced only around 20 barrels annually, far too low an output for Buck and Bradley, whose goal in opening the distillery was always to focus on whiskey.

The result of this impressive move, as well as the instillation of two 1,000-gallon copper stills from Forsyth in Scotland, has created the opportunity to produce a second release of Warfield Distillery’s Organic American Whiskey. The whiskey is mashed and distilled in the mountains of Ketchum, Idaho and aged in traditional ex-bourbon barrels. 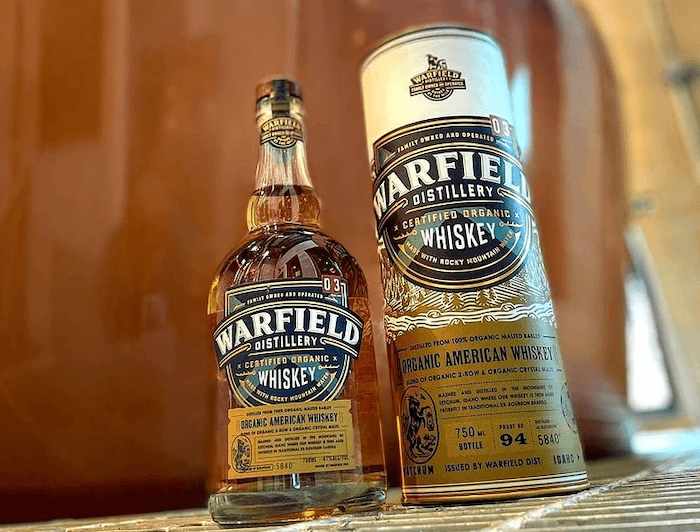 Nose: Green apple and melon, a real fruit bomb, with notes of honey and cut stem.

Palate: There’s a bit of an unpronounced flavor profile with this whiskey. Notes of tamarind and raisin overtake the fruitier nose, with low levels of vanilla and that malted barley. It has a slightly bitter finish.

I can’t say I highly recommend this whiskey, though I love what Warfield Distillery is doing to positively move the distillery’s needle toward a more environmentally friendly method of production. I simply prefer a stronger whiskey, and this one is on the watery side. That said, it is by no means offensive and may be a good option for someone who likes a softer flavor profile.