Editor’s Note: This whiskey was provided to us as a review sample by Sespe Creek Distillery. This in no way, per our editorial policies, influenced the final outcome of this review.

In the long line of American whiskey makers, there are several who take inspiration from the Scottish tradition of peat-smoking. Sometimes that experiment works out better  than others . Sespe Creek Distillery, of Oxnard, California, has brought the fire to the campout in their Warbringer Mesquite Smoked Southwest Bourbon. This time it’s the corn: a mash bill of 75% roasted, mesquite-smoked corn. (Watch this process undertaken by the distiller.)

The distiller behind Sespe Creek is David Brandt, PhD. He has an impressive, if unusual, pre-whiskey career. He worked developing diabetes and cancer drugs and groundbreaking disease-testing techniques, and has brought that spirit of experimentation to the distilling world with smoking grains, flavor infusions and the “accelerated aging” of spirits.

That last one perks up the ears of many a whiskey lover. Brandt has apparently achieved it by taking unaged spirit, his choice of barrel wood, and exposing both to controlled heat in a sealed container. The conditions make a spirit chemically age very quickly – the esters, terpenes and lactones of a much older spirit infusing over days or hours instead of years. Make your next party conversation entertaining by reviewing the patent application.

Brandt has moved on. “We’re just starting with the best ingredients we can, and really carefully controlling the speed at which things happen. Other whiskey mashes are fermented for two-to-four days. That’s going to give you a lot of off flavors. Ours is fermented for 10.”

Sespe Creek Distillery claims no special process for the Warbringer, however the fermentation and barreling conditions are tightly temperature controlled. It took three years of trial and error, using different corn smoking times, yeasts and aging lengths to create the whiskey in bottle today. “I wanted to pair the most complex whiskey style with the most complex smoke flavor. Mesquite is where you get that,” said Brandt.

Prior to Warbringer, Brandt & company have also distilled some more-interesting-than-normal flavored vodkas. These are on the cusp of a rebrand, and should re-release in late spring 2019. They’ll be accompanied by a mineral and salt enriched vodka developed with acclaimed bartender Josh Goldman.

On the whiskey side, the theme of pairing the right grain with the right smoke continues. Be on the look out for a hickory-smoked rye and an applewood-smoked oat whiskey. 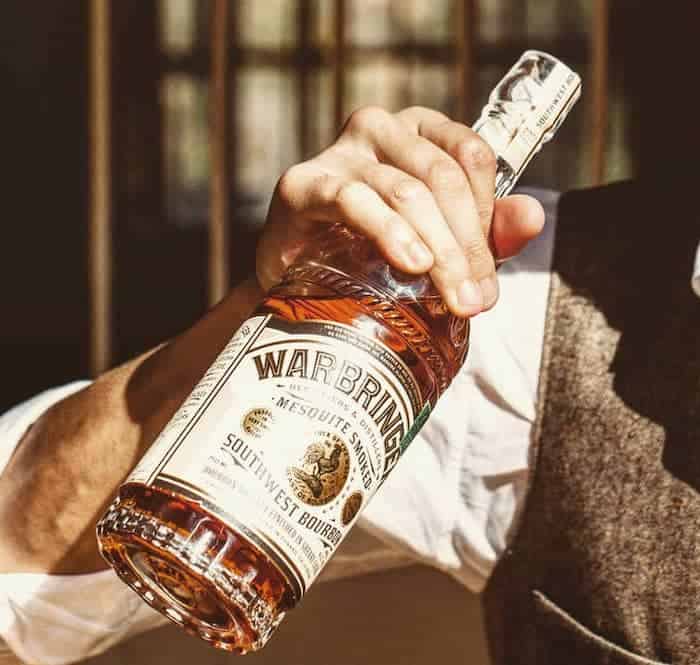 Appearance: Warbringer comes in a pretty, scalloped glass bottle that frankly seems at odds with its hyper-masculine story craft. The liquid is a clear, warm butterscotch that forms fat tears on the glass.

Nose: This whiskey’s nose is plantain roasted over a campfire. Toward the end of the inhale, there’s meatiness. As it rests, the nose sweetens to smoky toffee.

Palate: Not a gentle whiskey, this. Warbringer explodes with banana fruitiness and a whiff of the nose’s campfire. The proof stings and quickly mellows to vanilla creaminess. A pleasant diesel flavor glides through the mid palate, leading to a long, herbaceous finish. Not nearly as smoky as I expected, given the talk and the nose.

This Southwest Bourbon works. The smoke is not overpowering; it calls back to the char of the barrel and the beach fires down the road, making for a balanced and interesting quaff. It’s a carefully crafted whiskey that holds up neat and also makes for an adventurous cocktail.