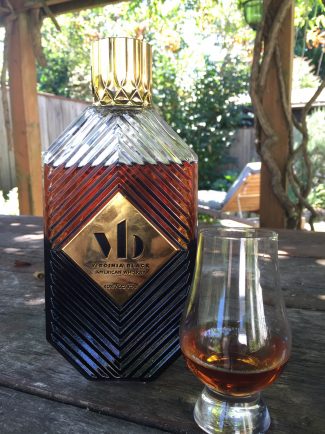 Editor’s Note: As was the case with the Gold Bar Gold Finished Whiskey we reviewed recently, I decided to pony up some of our funds for this bottling. Given I had a bias against Drake’s finest whiskey already (see below), I handed this review sample off to our managing editor for consideration.

When we first heard about Virginia Black American Whiskey, the collaboration between spirits industry entrepreneur Brent Hocking and wildly successful musician Drake, it sent our editor-in-chief Nino off the deep end (Editor: HELL YES IT DID!). Consensus among the serious whiskey community was more or less unanimous: another silly celebrity-backed bottling that’s all style and no substance, nothing but a bit of poor-quality puffery ensconced in a suspiciously cologne-like bottle.

That’s all basically true. But I’ll be honest: I’m not philosophically opposed to Virginia Black, even though this whiskey was decidedly not made with me in mind. I may be a millennial woman, but I needed to Google “Drake” to come up with some references beyond Hotline Bling, and my tastes tend towards the expensive and bizarre anyhow (peated whisky, cask-strength bourbon, obscure varietal fruit brandy).

But it’s not a bad thing for whiskey’s tent to get (incrementally) bigger. For years, the industry has made products and advertisements that target one kind of consumer: men, usually white men. A quick scroll through the Google Image results for “vintage whiskey ads” reveals rugged cowboys, polished businessmen, bounding football players, ample guns, and women in various stages of undress, as well as a grand total of two images featuring black men: one with athletes Rafer Johnson and Jesse Owens, and another depicting a black waiter serving whiskey on a tray.

The industry’s gotten a little better since then, but its outreach to younger drinkers, female drinkers, and drinkers of color has been spotty and, at times, clumsy. If whiskey wants to be relevant in the future, developing a diverse consumer base is going to be crucial.

So sure, Virginia Black may not hearken back to the glory days of fabled whiskey gone by. And it may be “dressed up in a pretty little bottle” – but so are many other expressions that get taken far more seriously. The Scots and the Italians know that style can be as important as substance – why can’t American whiskey toss out a few silly bella figura bottlings every once in a while?

Will Virginia Black inspire the next generation of female whisky lovers to explore the non-celebrity themed sections of their local liquor store, as Tim Knittel hopes? I suppose anything’s possible, although it seems to me that relegating women to “women’s whiskey” serves only to distance them from the rest of the industry, like setting us a kid’s table while the real party goes on next door.

But that’s enough politics for now. What’s the deal with this whiskey? It’s a blend of two, three, and four-year-old bourbon from MGP, “finished with a decadent profile.” Interestingly,  you don’t find “bourbon” written anywhere on the bottle, even though that’s how it’s spun in associated marketing materials. It’s bottled at 80 proof, and retails for around $35 a bottle.

Appearance: I actually like the bottle – the gold accent looks great on my dark wood liquor cabinet, and the diagonal ribbing on the glass gives it a cool midcentury feel. The plastic cap feels chintzy, though. The spirit itself is dark amber, far darker than I’d imagine given the spirit’s young age.

Nose: Smooth and buttery, with aromas of maple syrup, popcorn, and some mild oak spice.

Palate: No surprises here. Almost unctuous in mouth feel, this is sweet and inoffensive in all ways. Creamy vanilla and sawdust gives way to a curiously vacant mid-palate, before a short, dry, reasonably pleasant rye-inflected finish. The texture is so buttery you hardly notice you’re drinking it – it just slips down.

It’s not so bad. It tastes weirdly adulterated, like some Canadian whiskies (an homage to Drake’s hometown?), but there’s nothing horrible about it. I can absolutely imagine drinking a lot of it without really realizing, like maybe waiting up late one night for my hotline to bling (did I do that right?)