Editor’s Note: These whiskies were provided to us as review samples by Virginia Distillery Co. This in no way, per our editorial policies, influenced the final outcome of this review.

We first talked about Virginia Distillery Co. (VDC) in 2015, just before they opened their doors to the public. They are one of the not-so-many distilleries in the United States making malt whisky, and are currently getting closer and closer to having their own American single malt. This category continues to expand, gaining reputation for making unique and tasteful expressions that, while in spirit with the famed whisky from Scotland, generally put their own American touches to the final bottled product.

VDC, as a fairly new production facility, is doing a wonderful job of producing whisky by blending. They are making their own single malt whisky, using 100% malted barley from the United States. That new make is then aged for a minimum of a year before blending with blended malt whisky imported from the highlands of Scotland. To add to their uniqueness, all finishing is done with locally influenced barrels. VDC exchanges casks with local wine, beer and cider producers to add extra layers of depth and complexity within their spirits. Scotch holds the same type of idea, as sherry and port cask finishing is a serendipitous result of trade well before the industrial revolution.

Another striking characteristic of the VDC distillery are their large copper pot stills. Sitting in what appears to be a stark, clean and clutter-free warehouse are two pot stills with massive lyne arms at 90-degree angles coming out of them. A traditional spirits safe sits near the condensers. I reached out to the folks at VDC, and their head distiller Ian Thomas was kind enough to provide a plethora of information about their distillation process. To begin, here is some technical information on their distillation setup:

They ferment their malted barley for three or four days to around seven or eight percent ABV. 10,000 liters of this mash is distilled to around 60 proof. 6,000 liters of the 60 proof low-wines is run through the spirits still and collected beginning at 156 proof. The initial fore shots are recycled back into the low-wines. Spirit collection stops at 140 proof, and the entire run takes two to three hours on a low heat setting to allow the more delicate volatiles to be maintained throughout the process. They use a liquid propane powered boiler, which cycles steam to the pot stills to heat the wash and the low wines. Approximately 1,100 liters of spirit is produced for aging.

Their distillery includes sub-chillers on both stills that use glycol to help ensure consistent cooling in hot summer months. This is an important feature to maintain a consistent product in the style they’re aiming for. Scotland doesn’t get as hot as Virginia, so technology helps make up the difference! VDC has so much potential to produce amazing products; it’s very exciting to get to try some of their first expressions here today. 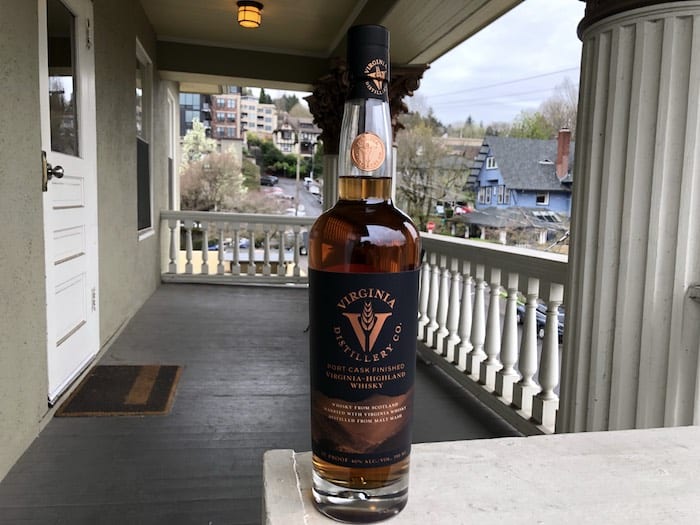 Palate: Well balanced with the port finish, as spice such as ginger and cinnamon mix nicely with vanilla, raisins, caramel and hazelnuts. There are also hints of cherry, green olive, and ripe tropical fruit as you continue to let it sit.

Final Thoughts: I often try to marry the idea of objectively reviewing whisky with the realization that every situation is truly unique. Here, I think we must consider the impressive work VDC has done to release quality whisky within only a few years of firing their stills. Many companies begin with vodka or gin as they build their aged whisky stocks, but VDC found an honest way to blend what they can make with openly sourced scotch. I find this honest, approachable and a creative way to get whisky into the bottle so you can start on your long-term projects. Well done!

Nose: Malty grains and fresh hay, a bit of lavender with blackberry and grapefruit, along with white pepper, ginger, and cinnamon.

Final Thoughts: Slightly lighter and less intricate than the port finished whisky, it drinks incredibly well. The highland style is very well put forward here, with a bit of sweetness and character brought in from the beer cask finishing. The blending is very well done, because it is incredibly balanced. This is a distinct whisky and one that could be enjoyed by many different palates. It refrains from having the overwhelmingly grain forward characteristic that some small brand American single malts can have. Instead, the large stills and beautifully crafted distillation setup produces a high quality new make spirit that has me really looking forward to what VDC will make in the future.