Editor’s Note: This whiskey was provided to us as a review sample by One Eight Distilling. This in no way, per our editorial policies, influenced the final outcome of this review.

The name One Eight Distilling comes from Article One, Section Eight of the Constitution. This is a nod to the distillery location in Washington DC, the district that is the capital of the nation. They are a distillery who sources local ingredients and offers bold flavors connected to the region. A distillery for the people, by the people.

One Eight Distilling believes in only local, organic ingredients for its locally made spirits. They feel it is important to showcase where a spirit is made by working with local farms that care for the people and the future. The ingredients are all from the Mid-Atlantic and similar to those used for centuries to distill trusted spirits.

The Untitled Whiskey series is experimentation on a very small scale, making use of typically sourced whiskeys in creative ways. Each batch of whiskey will probably be made once and only offered in limited quantities locally (DC, Maryland and Delaware). They have recently expanded to some Illinois and Colorado locations. Special shipping requests can be made to other regions.

Untitled Whiskey No. 18 is the latest in the untitled whiskey series and the sample for our review. One Eight Distilling also offers other experimental whiskeys and gin. For something more readily available and less experimental they also have District Made Spirits. These might be more likely in a liquor store near you in the future.

The whiskey I’m reviewing here is a blend of 14 year old high rye bourbon and the distillery’s District Made rye. 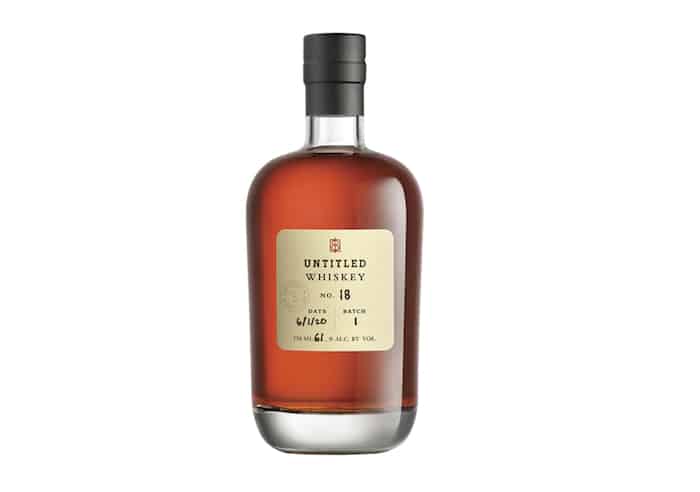 Untitled No 18 Whiskey (image via One Eight Distilling)

Vital Stats: A blend of District Made Rye Whiskey with a barrel of the finest 14-year-old high-rye bourbon. One Eight Distilling. Bottled at barrel proof. 122 proof. Untitled No 18 Whiskey is a distillery exclusive for $80.

Nose: In this whiskey sample I found it to be floral, fruity and grassy with hints of vanilla, plum, and cherry. There was a touch of turpentine. Untitled Whiskey 18 is both sweet and strong.

Palate: The whiskey sample provided strong flavors of stone fruits such as peach and apricot. I also noticed some rosewood, dried leaves, molasses and other baking spices.

To me any barrel strength whiskey seems to lose some complexity in nose and palate from the strong heat. I like to add a bit of water but that does change the flavors slightly to be sweeter, in my opinion. Untitled Whiskey 18 is a bit too strong for me with a bitter bite especially in the finish. I thought it had a very great opening sweetness and a nice, rich, and warm mouthfeel.

This whiskey is very smooth to drink with or without water. Barrel strength seems to be a preference that you either like or dislike, so I end this review by saying it's not usually my cup of tea. The flavors are good but I think I would prefer something with less outdoor flavors of wood, leather and leaves.