For many years, the widely accepted version of how Jack Daniel’s Tennessee Whiskey got its start was that a preacher and farm owner in Lynchburg took a teenager named Jack Daniel under his wing in 1864 and taught him how to run the farm’s still. That experience allowed Daniel to found the now internationally recognized brand in 1866.

Yet, as the 150th anniversary approached in 2016, the distillery dove into its own history came out publicly with a new narrative – that one of the preacher’s slaves, Nathan “Nearest” Green, was Daniel’s actual distilling mentor.

The revelation inspired a wave of articles delving into the role that slaves and blacks played in making whiskey in the United States – most especially by The New York Times – and more recently, a new bottling in honor of Green’s contribution to whiskey: Uncle Nearest 1856 Premium Whiskey.

A key driver of the new brand’s creation is Fawn Weaver. She was so inspired by Green’s story, according to The Tennessean,  that she launched the Nearest Green Foundation to promote his legacy, pulled together a coalition to launch the brand, and even bought the 313-acre Lynchburg farm where Green taught Daniel and worked together side by side for years afterward.

The founders later picked a historic, 270-acre horse farm in nearby Shelbyville to build their distillery, tasting room, and music venue, with the company wishing to respect Daniel’s legacy as well as honor Green’s.

For now, the company is partnering with other one or two other Tennessee distillers to produce the whiskey using in-state ingredients and techniques Green would have used. While they don’t get into too many specifics, Uncle Nearest generally follows the Lincoln County Process – which they believe Green helped perfect – of letting the whiskey drip through tightly-packed sugar maple charcoal for 14 days to filter it before aging in new American oak barrels. The Premium Silver expression also uses a unique, 11-step, 14-day, triple-charcoal mellowing process supposedly developed specifically for the brand. 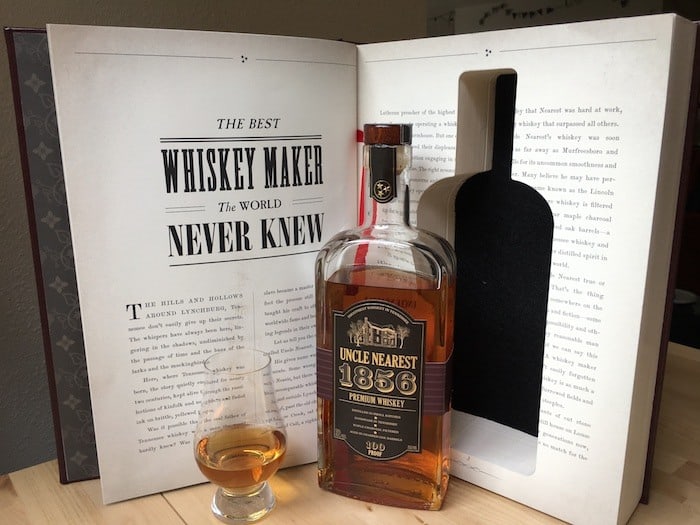 Vital stats: Mash bill of 90% corn and rye with at least some of the remainder being malted corn, all from Tennessee farms, according to Uncle Nearest. Filtered with Maple charcoal via the Lincoln County Process and aged in charred, new American Oak barrels for an undisclosed time. Bottled at 50% ABV and sold for about $58 per bottle.

Appearance: Sold in a plain and tall but still elegant bottle. Both in that bottle and poured in a glass, it has a bronze quality with a hint of red to it that makes it a hair darker than average.

Nose: A sniff initially brings in a rich, molasses-like sweetness through the nasal passages. That quickly gives way to an earthier bouquet of grass, charcoal, and nutmeg, and a touch of maple adding a bit of sweetness.

Palate: Like with the nose, Uncle Nearest enters the palate with a rich and smooth character, this time with more of a caramelly flavor with distant notes of apple and hay. That sweetness lingers for a moment before again yielding to a spicier mixture of clove, nutmeg, charcoal, and oak, while also retaining a touch of the hay flavor. That spiciness builds up quickly into something akin to a chili pepper in the mouth, but with a corn- and grass-like sweetness keeping it in control. Swallowing sends rush of that spice throughout the mouth, which quickly fades into a rich, creamy caramel that hangs in the mouth for another minute or so – with a bit of corn and hay giving it character and occasionally punctuated by pleasantly spicy tingles.

While Uncle Nearest wouldn’t be at the tip-top of my list of favorite whiskeys to sip on, it certainly has plenty of character and lots of flavor for a wide variety of palates. With a smooth caramelly flavor to satisfy drinkers with a sweet tooth, it also packs a decent punch for those looking for something a bit stronger and spicier. Although it gets a bit spicier than I’d like, I still admire how Uncle Nearest manages to retain a variety of flavor elements in both its sweetest and harshest moments. It’s a bit pricey, but Uncle Nearest is still worth a try if come across it.