Editor’s Note: This whiskey was provided to us as a review sample by Treaty Oak Distilling. This in no way, per our editorial policies, influenced the final outcome of this review. It should also be noted that by clicking the buy link towards the bottom of this review our site receives a small referral payment which helps to support, but not influence, our editorial and other costs.

Red Handed Bourbon is a collaboration between Whiskey Myers and Treaty Oak Distilling. Both groups are really big on experimentation and collaboration–but if you aren’t familiar with either group, then you might not be alone.

Whiskey Myers is a six-person southern rock group from Palestine, Texas. But they don’t put themselves into one box. “There’s never a plan or the sense that we need to make a song sound a certain way,” adds guitarist John Jeffers. “A country song could end up a rocker or the other way around — it’s extremely organic, and that’s always been us as a band.” Whiskey Myers started playing shows in their hometown then expanded to all of Texas, becoming well known on the Red Dirt scene. They have released five albums starting in 2008, with the latest being a self-titled release in September of 2019.

The team at Treaty Oak Distilling comes from a variety of backgrounds. Their ethos is eclectic in nature, drawing on tradition but also experimentation. They like to be artistic with their whiskey making. “We are pushed to re-think the creative process the way disruptive musicians, chefs and painters do. We experiment with ingredients and how they’re sourced, with distilling techniques, with ways of finishing—always informed by hard-won knowledge,” says the brand.

I think you can now see why Whiskey Myers and Treaty Oak Distilling worked together on a whiskey collaboration. They both like to work with a variety of people, get creative and push the boundaries of what they are supposed to be. The goal of Whiskey Myers in music is similar to that of Treaty Oak Distilling: “purposefully break from convention in order to create something new, or even curious.” 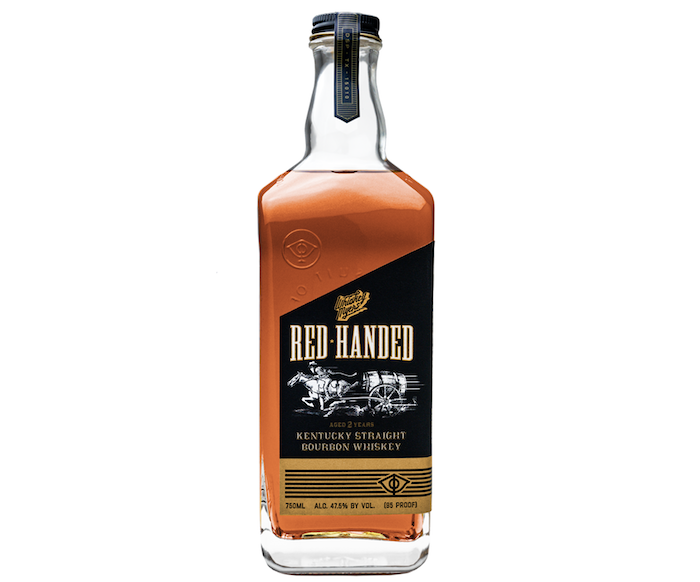 Nose: It’s very mild, vaguely a whiskey nose. I get aromas of oak and sweet grass.

Palate: Red Handed Bourbon gave me all the typical bourbon flavors of burnt orange and brown sugar. There’s also some oak and spice like you would find in a rye.

You almost wouldn’t know this was a bourbon by the nose, and the palate is similar to a rye. I found this whiskey to be mostly smooth with a hot, spicy finish. There are typical bourbon flavors, but not much else. It’s very mild yet warming. It’s pretty tasty for a two year bourbon. I’m curious what it would be with a bit more age.