Editor’s Note: This whiskey was provided to us as a review sample by Town Branch. This in no way, per our editorial policies, influenced the final outcome of this review. It should also be noted that by clicking the buy link towards the bottom of this review our site receives a small referral payment which helps to support, but not influence, our editorial and other costs.

Did you know that not all single malt whiskey is made to the same specifications around the world? To be labeled a “malt whiskey (or whisky)” in Ireland and Scotland, the whiskey must be made with 100 percent malted barley. In America, only 51 percent malted barley grain is required. To be a “single malt” in the U.K., Ireland, and elsewhere, the product must be made at a single distillery. In the United States, there’s no standard of identity for single malt whiskey–yet. In this review, we’ll be talking about an American malt whiskey you might not have heard about yet by Town Branch.

Town Branch is the first new distillery built in Lexington since prohibition, but it stands in good company. When Town Branch Distillery opened in 2012 in Lexington, Kentucky, they became part of the world-renowned Kentucky Bourbon Trail. Town Branch has another Kentucky location, Alltech Dueling Barrels Brewery and Distillery, in Pikeville. For even more fun and history they also have Pearse Lyon Distillery at St. James church in Dublin Ireland.

Being the new “kid” on the block hasn’t been easy with distilleries like Evan Williams, Jim Beam, Michter’s, and Wild Turkey on the Kentucky Bourbon trail. That’s a lot of competition to start from scratch and compete on this level, but Town Branch is offering something for everyone, including a bourbon, rye, and single malt whiskey. Some others on the trail that you might not know about, Wilderness Trail and Rabbit Hole, both opened at the same time as Town Branch. 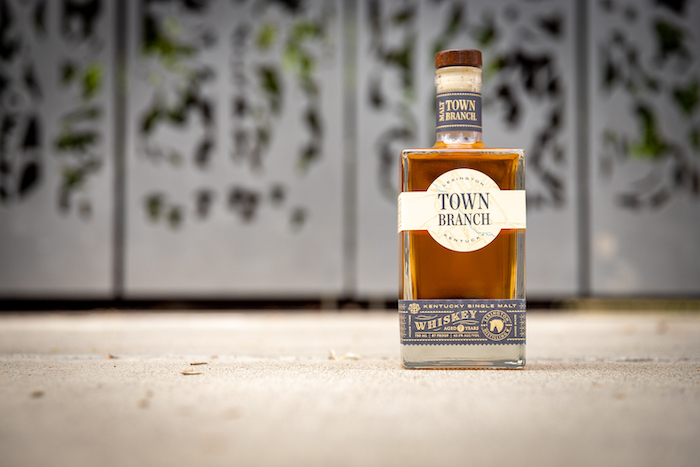 Nose: The nose is slightly sweet and very pleasant. I get hints of fresh cut grass and citrus. Seems like a late summer day in a bottle.

Palate: This Town Branch Single Malt Whiskey was smooth with a little burn in the finish. There was caramel, orange, autumn spice, with a bitter vegetable finish. It might not sound like the best combination but just think of how squash can be both savory and sweet. This single malt whiskey had all those warming spices, but it also gave my stomach a nice warm feeling. Seems perfect for a cool evening in later summer or fall.

Because of its warming spices, I think this single malt whiskey would be perfect for sipping on a late summer or fall day. It’s very smooth overall, with a little bite and some slight heat in the belly. It seems like this would make a really great mixer for an old fashioned or Manhattan.