It should be known, to a seasoned bourbon drinker, that 95% of the world’s bourbon is produced in Kentucky. In fact, bourbon as we know it is a product indigenous to the U.S. and is revered as “America’s Official Native Spirit.” The Kentucky Bourbon Trail was started in 1999 to offer a road-trip style tour through the state’s vast bourbon-filled countryside, providing the opportunity to explore all 38 distilleries on the map.

A favorite on the stop is the Town Branch Distillery, a part of Lexington Brewing & Distilling Company, “one of the few joint brewing and distilling operations in the world.” Town Branch Distillery is the first distillery to open in Lexington, Kentucky, since Prohibition, and has steadily drawn on the popularity of the Kentucky Bourbon Trail to entice new consumers through their doors.

The Town Branch Sherry Cask Finished Bourbon that I tasted today is a simple expression, one that didn’t quite live up to its potential in my opinion. Oloroso sherry casks, like the ones this Town Branch Sherry Cask Bourbon was finished in, are popular due to their elegant and subtle additions to a whiskey. Oloroso is an oxidatively ripened sherry and tends to be dry, with a nutty aroma that fits well with most whiskeys. Oloroso sherry barrels are larger than most American Standard Barrels (ASB) ex-bourbon barrels, with a volume of 500 liters compared to the ASB volume of 200 liters.

Of the Town Branch Sherry Cask Finished Bourbon, Town Branch master distiller Marc Coffman states, “This whiskey is truly handcrafted. There is no automation in the distillation process, and I decide where to make the cuts. On top of that, the sherry casks that we have been importing from Spain have been of excellent quality. They provide deep sherry notes that end up in the bourbon once its aging is complete.”

Some may say that finishing bourbon in a sherry cask is a bit of a no-no, as it is commonly accepted protocol that bourbon be aged in new, charred oak casks and contain no other flavorings. But for some, rules are made to be broken. 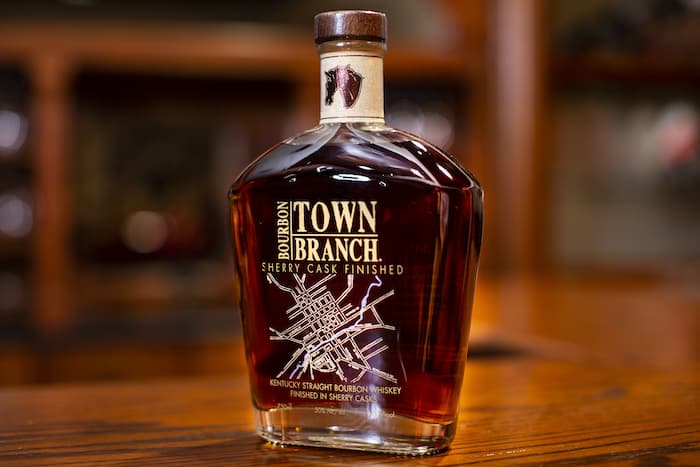 Palate: Finished for over a year, the whiskey has managed to pull some of the benefits of the sherry cask, but quickly becomes overwhelmed by a slightly medicinal tang. It reminded me a bit of corked wine. There was a bit of a green tea taste mixed with a nuttiness, and a slight heat to the finish.

This isn’t a great bourbon. I wish it had a stronger flavor profile and I did wonder if I may have gotten a bad batch, but I think it will work well in an old fashioned with a nice sugar muddling and angostura bitters to bolster the flavor.