Editor’s Note: This whiskey was provided to us as a review sample by Steel Bending Spirits. This in no way, per our editorial policies, influenced the final outcome of this review. It should also be noted that by clicking the buy link towards the bottom of this review our site receives a small referral payment which helps to support, but not influence, our editorial and other costs.

Three Chord Bourbon wants to feel as great on your lips as the perfect song–you know, the one you always want as an encore.

Three Chord is all about the “power of three.” That’s flavor, structure, and finish, according to the brand.

This Three Chord release is called “Strange Collaboration.” That doesn’t mean the collaboration was odd or unusual. Instead, “Strange” is the name of the family winery in California’s Santa Rita Hills AVA that produced the pinot noir barrels that this whiskey is finished in.

Three Chord Strange Collaboration starts with a blend of bourbons carefully selected from Kentucky. These whiskies are aged two to six years, and selected for their “low fusel oil content and light body.” After blending, the whiskey spends three months in the Strange Family French oak pinot noir barrels.

And there’s more on the label that hints back to Three Chord’s heart and soul music theme: The phrase “Perfectly Tuned Taste” is written on every bottle of Three Chord Bourbon. What exactly does that mean, exactly?

“Our process begins by carefully selecting the finest bourbon and rye whiskeys from stocks in Kentucky, Tennessee, and Indiana. Once the blend of spirits is assembled, 300 gallons at a time, we apply our proprietary process of pyrolysis — heating American oak to precise temperatures to release specific flavor and aroma compounds — then we blend it to integrate these compounds into the blended spirit. Finally, each small batch blend of Three Chord is evaluated by a trained sensory panel to ensure an uncommon depth of flavor, character, aroma and a “Perfectly Tuned Taste” in each bottle.” 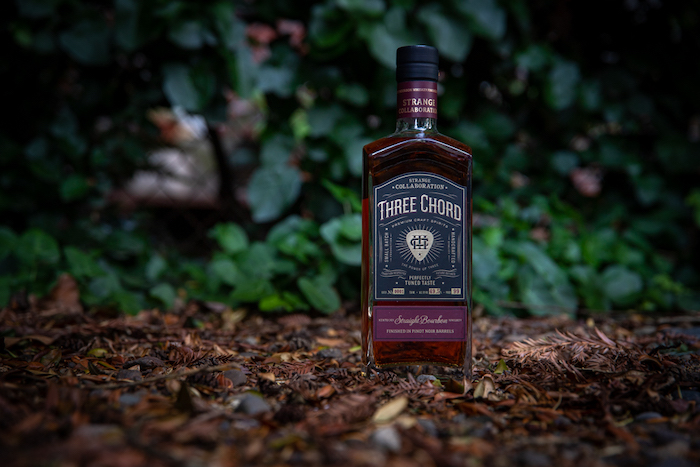 Nose: The nose is very sweet and strong. As I hold the glass up even longer, I get hints of pinot noir, honey, and maple.

Palate: Three Chord Straight Bourbon is smooth with a bit of heat in the middle. It’s dry like a wine, fruity, with minerals and iodine. There’s a slightly bitter finish and understated wine flavor.

The nose is strong, but this is actually very smooth for a higher proof whiskey. The pinot barrels have left their mark. It’s not in-your-face pinot, but subtle and complimentary to the whiskey. This is a very good blending and balance of flavors in my opinion. Not everyone can get the right balance of wine and whiskey. I think Three Chord did a great job. It might leave you with wine breath, but this 99 proof whiskey will make you feel a bit more tipsy than a glass of pinot noir.