Editor’s Note: This whiskey was provided to us as a review sample by Piedmont Distillers. This in no way, per our editorial policies, influenced the final outcome of this review. It should also be noted that by clicking the buy link towards the bottom of this review our site receives a small referral payment which helps to support, but not influence, our editorial and other costs.

Unfortunately, in 1948, Bobby Jones showed symptoms of syringomyelia. He acquired the disease in a freak accident when he was struck by lightning in 1929. The disease causes fluid cysts to form within the spinal cord. After Bobby’s death in 1971, his family partnered with the Chiari & Syringomyelia Foundation. Portions of the proceeds from the sales of The Clover Single Barrel Straight Rye Whiskey go to the Bobby Jones Chiari & Syringomyelia Foundation. You can find The Clover at select golf courses around the country. 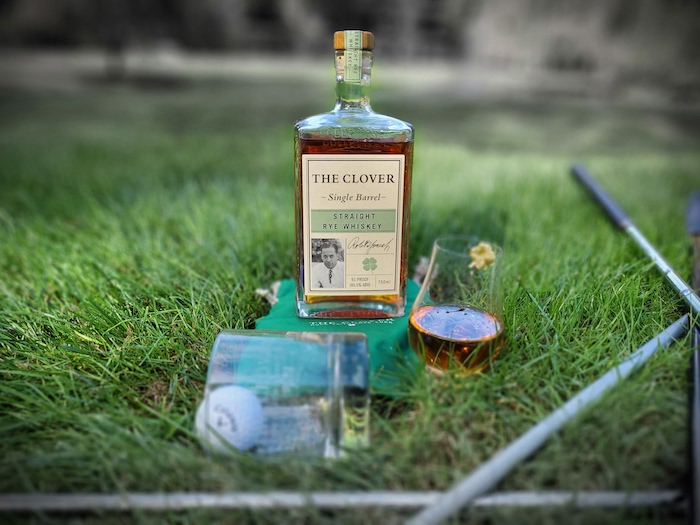 Nose: Pungent and bright black cherry greets the nostrils right off the bat. Dill and spearmint offer a refreshing herbaceous quality to the dram. The orange peel comes through the middle. Some oak and leather round out the end.

Palate: The whiskey is a bit tannic and harsh with a touch of acetone. Once further into it, the cherry and orange peel mingle with honey. However, it is not as fruity on the palate as it is on the nose. The whiskey is spicy with black peppercorns than baking spices. The finish is filled with tobacco and leather. Overall, the dram reminds me of marbled rye bread.

The Clover Single Barrel Rye Whiskey is a decent whiskey and definitely suitable on the golf course. It would pair well with a pastrami sandwich. I was surprised by the dill on the nose in a good way. I only docked a half-point for the tannic nature of the whiskey on the palate, as well as the acetone.