Editor’s Note: This whiskey was provided to us as a review sample by The Clover. This in no way, per our editorial policies, influenced the final outcome of this review. It should also be noted that by clicking the buy link towards the bottom of this review our site receives a small referral payment which helps to support, but not influence, our editorial and other costs.

Unfortunately, in 1948, Bobby Jones showed symptoms of syringomyelia. He acquired the disease in a freak accident when he was struck by lightning in 1929. The disease causes fluid cysts to form within the spinal cord. After Bobby’s death in 1971, his family partnered with the Chiari & Syringomyelia Foundation. Portions of the proceeds from the sales of The Clover Single Barrel Straight Bourbon Whiskey go to the Bobby Jones Chiari & Syringomyelia Foundation. You can find The Clover at select golf courses around the country. 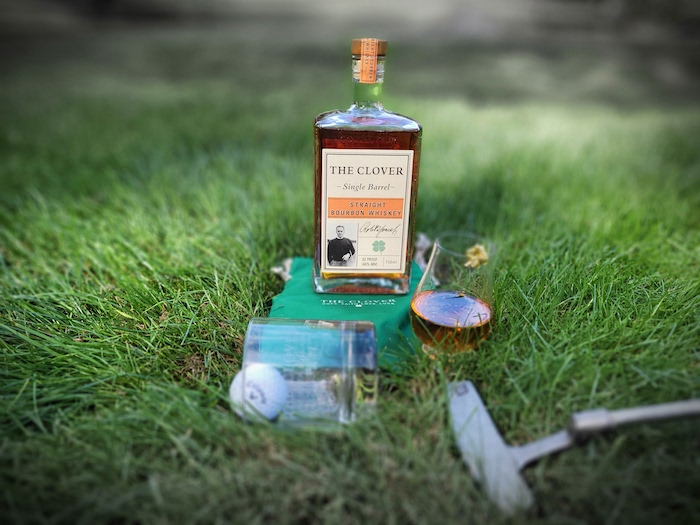 Nose: Lemon oil and lemon peel come forward instantly, like lemon verbena tea. There is a slight bit of acetone even after letting it breathe. The whiskey smells sweet, with honeycomb and light brown sugar. Otherwise, the nose is mellow with little oak.

Palate: The lemon from the nose mingles with cereal. It is reminiscent of a lemon zest scone. For a bourbon, it is not very sweet—just a touch of waxed honeycomb. There is the right amount of oak on the palate, and it pairs nicely with the cinnamon finish and lingering peppercorn.

The Clover Single Barrel Straight Bourbon is a whiskey perfect for a round of golf. At first, it makes you think it is mellow, but it has a balance of flavor and proof. Lemon over orange peel makes this bourbon great for cocktails or on a big cube. I personally have been enjoying it in Arnold Palmers.