MGP Ingredients, as you’ve read on this site many times, is the biggest private-label producer in the whiskey business. A lot of brands fill their bottles with MGP whiskies – just look for “distilled in Indiana” on the labels.

It’s no surprise, then, that MGP makes a variety of whiskeys. But for my money, rye has long been its best. So a 10-year-old MGP straight rye sounds like a promising place to start for a new release.

Templeton 10 joins the well-established 4-year rye and 6-year rye from the Iowa-based Templeton Distillery. (I reviewed both of the younger Templeton ryes earlier this year.) But the 4-year and 6-year whiskies can’t be labeled as “straight rye,” while this 10-year version obviously can. That suggests it carries none of the artificial flavorings Templeton Distillery puts into its younger whiskies. For purists, that’s definitely a good thing.

What you have, in short, is a 10-year-old single barrel MGP straight rye, poured into bottles at 104 proof. Yea, sign me up to try that.

Templeton has been barreling its own whiskies in Iowa for a few years, and should start releasing them to the world in 2022 or 2023. It’ll be interesting to see how the MGP Templetons will change when they become the Iowa-distilled Templetons.

Whatever that shift ends up looking (and tasting) like, here’s to hoping the distillery keeps the 10-year straight rye as a permanent addition to its lineup. 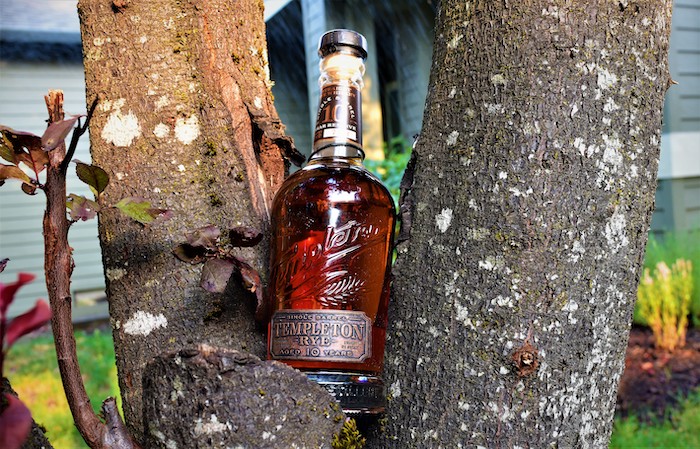 Appearance: This is dark whiskey, befitting something that spent 10 years in new oak. Deep amber. Solid legs on the side of a glass.

Nose: Even after half an hour, this is boozy in my Glencairn. But there’s a sweetness and a gentle spiciness underneath the ethanol. I smell cinnamon, chocolate orange jelly sticks and a whiff of raspberry habanero sauce. What I don’t smell is traditional rye grass. Seems like a decade in the barrel has been a stronger influence than the rye, in this case.

Palate: The first wave of flavor is dark chocolate and caramelized figs. The barrel comes through strongly again here, as it did on the nose. The rye is present too, but it’s not overwhelming and it’s not particularly reminiscent of the herbal or grassy flavors I often associate with ryes. In the mid-palate, I found a surprising spoonful of chocolate chip mint ice cream followed by a long, warm, charred-oak finish. A splash of water really helped open up this rye, mellowing it and rounding it out nicely.

Templeton did a 10-year Special Reserve a few years ago. But that wasn’t a straight rye, it wasn’t a permanent addition to the lineup and it was stupid expensive. This new offering isn’t cheap either, at $85. But for a 10-year MGP rye, that’s not an outrageous price point. Templeton’s new bottle and label design is sharp, and the whiskey inside is darned good. It has a lush mouthfeel, living up to the barrel proof designation, and leaves me ready for another pour.