With a dust up over naming rights to a historic distilling tradition largely averted and well in the rearview mirror, Pennsylvania-based Stoll & Wolfe Distilling has turned a new page with its recent release of a Pennsylvania-style rye whiskey.

The new rye is the second whiskey in the Stoll & Wolfe lineup, preceded by a blend of American straight whiskeys so far released in two batches.

Stoll & Wolfe began – both in practice and in name – as an effort to reclaim the legacy of the historic Bomberger’s Distillery near Schaefferstown, Penn. The facility traces its origins back to the 1750s and produced under the names Schenk, Bomberger’s and Michter’s before closing in 1990 and falling into disrepair.

Locals Erik and Avianna Wolfe, founders of Heritage Spirits, partnered with Dick Stoll – who tutored under Everett Beam, ran the old distillery before it closed, and had remained in the area as a maintenance employee for the local school district, according to a Whiskey Advocate profile – established a new facility in nearby Lititz and ran with the Bomberger’s name, releasing their first whiskey in 2014.

Use of that name, however, prompted a swift legal response from Chatham Imports, who claimed Michter’s old trademarks and a derivative of Bomberger’s. We’ve previously covered that dispute in more detail, but it ended with the partners rebranding to their current, eponymous name and the slogan “names change, traditions endure.” 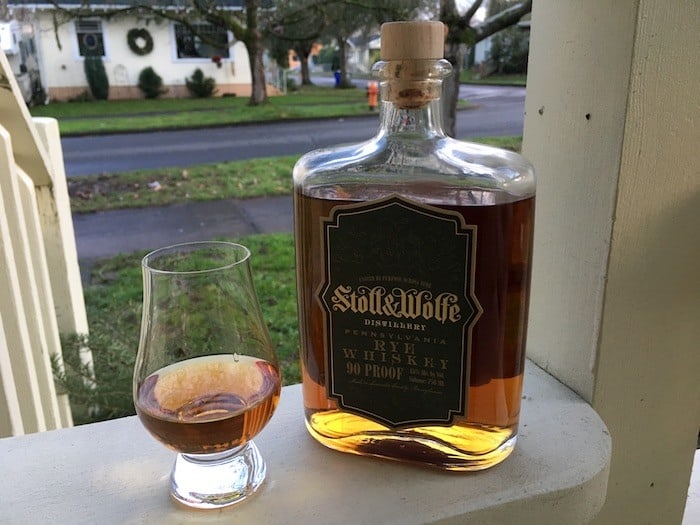 Appearance: A fairly typical golden amber,  perhaps a touch redder and darker than the median. I tend to ignore the bottle for this section, but I find this one particularly noteworthy in that it’s unassumingly elegant – short, stout, and simple.

Nose: The first sniff hits the nose like a surprisingly earthy wave that’s heavy on rye and oak with notes of clove, ginger, and citrus giving it additional zest. That mellows down into a sweeter bouquet caramel, orange, and a hint of spices.

Palate: The first sip eases onto the tongue with a faint twinge of smoke and spices, specifically rye. That rye twinge grows stronger as it sits on the tongue – skewing the flavor a bit toward an earthy caramel with a bit of cinnamon – but never building to an overwhelming degree. Swallowing strips that flavor profile down to a bare, yet slightly sweet rye flavor with a slight tingle in front of the mouth. That’s followed by a subsequent wave of spiciness that develops in the back of the mouth and marches forward. That leaves a sweet caramel aftertaste in the mouth alongside a faint hum of spicy rye.

For spending barely a year in a cask, Stoll & Wolfe Rye Whiskey punches well above its figurative weight in terms of maturity. While further aging may have given it more depth, it still covers the sweet and spicy characteristics of rye without straying too far in either direction. Those looking for a spicier rye might be underwhelmed, but this is otherwise an easy drinker suitable for sipping and mixing.