Founded by Ed Tiedge, an ex-hedge fund manager and classically trained Cognac distiller, StilltheOne out of New York is best known for fermenting mead in to a popular series of honey vodkas. One day, while contemplating life over a few pints of the local Freshchester Pale Ale from Captain Lawrence Brewing, the distilling team at StilltheOne came up with the idea of turning this hoppy, quaffable brew in to a collaborative whiskey project. Brewery owner Scott Vaccaro was on board, and subsequently sent thousands of gallons of finished pale ale to their partner distillery. The resulting 287 Single Malt was first produced in 2013, named after the mid-Atlantic highway that connects their respective production facilities.

We’ve seen this brewery/distillery collaborative spirit emerge once before in New York state, and StilltheOne has continued this trend ever since the initial release of 287. In the past four years, they’ve released other similar collaborations with local breweries, using a Belgian-style ale for their Route 1 whiskey, and a strong stout for their 9A project. The ale choice for this whiskey’s wash, Freshchester Pale Ale, stands apart as a light, crisp, hoppy ale that should impart a greener, brighter taste profile than the rest. The finished distillate is aged 10 months in charred American Oak. 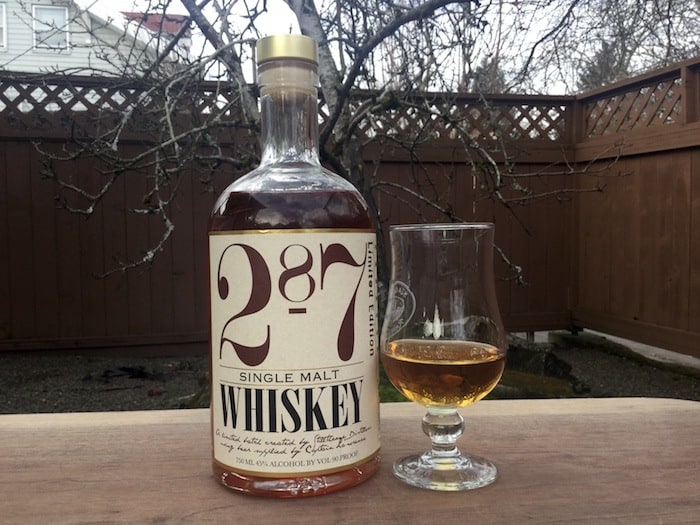 Appearance: The brilliance of this whiskey is notable from the first decanting, and it carries with it a lively golden hue with and a honey-like glow through its clarified body. The viscosity seems tame, small beads form instead of thick wave-like legs inside the bulb. It dances spryly like Jell-O as a swirling motion is engaged.

Nose: Hops can be citrusy, and here they most certainly project that aromatic angle. The intensified, distilled nose from a hoppy beer creates a whiskey that bursts with candied lemon peel, grapefruit juice, and orange marmalade. Somehow, the intensity of citrus fruit meddling with heavy alcohol levels does not produce the dreaded Pledge-like wafts; instead, it’s reminiscent of a summer beach cocktail. Unfortunately for purists, it bears almost no aromatic resemblance to traditional single malt whiskeys other than a tinge of vanilla cutting through the fruit salad in my glass.

Palate: This is where the whiskey starts to come together as a unique product that still resembles the label’s promises. On first sip, the citrusy hop character transforms into a brighter, freshly cut grass note that plays off the astringency of the oak nicely. Brown bread flavors emerge slowly, and embrace the accompanying vanilla and caramel notes as a style-defining yet clearly background flavor. This whiskey is all about the hops though, and it’s played off in such a fruity, vibrant, and light way that concentrated bitterness and powdery chlorophyll expectations are discarded in favor of an eminently chuggable, lemon and honey-forward single malt.

There have been many failures in the world of hop-forward whiskey, and this is certainly not one of them. It's a fabulous adventure for lovers of experimental whiskeys, and is sure to be a secret weapon in the arsenal whichever cocktail bartenders are lucky enough to discover it. Purists avoid, but everyone else should at least try a sip if available to you.