Square 6 is part of Heaven Hill’s one barrel a day craft distilling project. “Each day at the Evan Williams Bourbon Experience in Louisville, Ky., artisanal distillers produce one barrel of American Whiskey and then patiently wait for it to come to age. It’s a hand-crafted process that involves tweaking and tasting at various stages until that specific mashbill achieves a taste profile worthy of bottling.”

According to Heaven Hill, the name Square 6 comes from the original plot of land where Evan Williams built Kentucky’s first commercial distillery in 1783. The Evan Williams Bourbon Experience is located on the same block of land on Louisville’s Whiskey Row. It opened in 2013 and still operates in this same location.

This high rye bourbon is a new recipe for Heaven Hill. It was a slow process of hand crafting the recipe and waiting years till it matured to the right tasting profile to bottle. This is the first bottling from the Evan Williams Bourbon Experience. It’s only available at the distillery and select Kentucky retailers. If you are lucky enough to try Square 6 Kentucky Straight Bourbon Whiskey you might want to buy all you can since it is a very limited release. 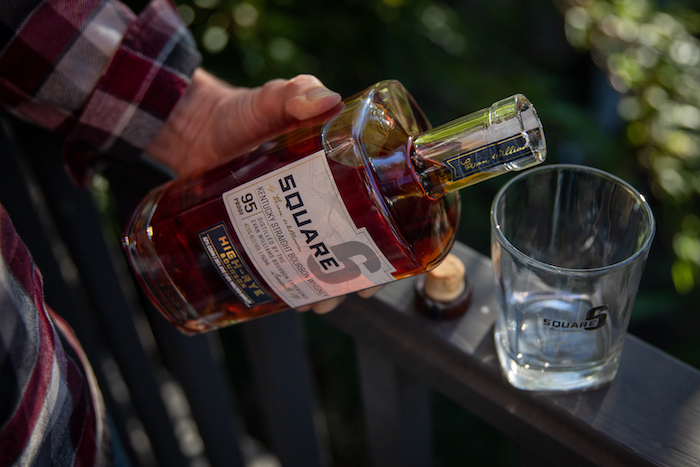 Appearance: A rich mahogany in color.

Nose: The aroma has a lot of summer qualities like wheat, alfalfa, and clover. There’s a slight floral undertone. The aroma is overall very pleasant and not overpowering

Palate: Square 6 is a little on the strong side but very smooth. There’s not a lot of distinct flavors but very good. It’s very earthy with a hint of sweetness. I detect notes of caramel, licorice, and grass.

I feel this is a great autumn whiskey. It has a warming mouthfeel yet still tastes like summer. Not a lot of intricate flavors but there’s enough depth. No water or mixer required to enjoy this one, unless you prefer it that way. I would drink this one neat, however, I would not spend $90 for it. The price is higher than I would like to see for the age of the bourbon but I very much enjoyed it and appreciate the craft behind it.

You’ll have to fly to Kentucky if you want to try this whiskey or any others coming from the Evan Williams Bourbon Experience. It might be worth the trip if you’ve never been. There’s plenty of whiskey to try on the Bourbon Trail.