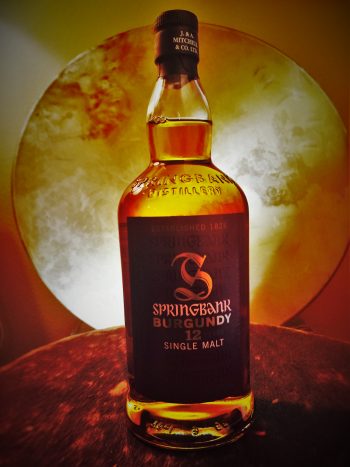 Campbeltown used to be one of the busiest cities in Scotland for whisky production, with over thirty distilleries. In fact, a few Lord Provosts of yesteryear proclaimed it “the whisky capital of the world.”

If quality were the deciding factor, then Campbeltown might still deserve that illustrious moniker, even with only a handful of distilleries operating in 2016. Why is that you ask? Because Springbank distillery is still located there, producing extraordinary whisky at surprisingly affordable prices.

Yes, when it comes to quality single malt scotch, Springbank is hard to beat. Of all the releases that come out of its stills, the limited ones are getting more and more fanfare these days, and for good reason. They stand head and shoulders above most other whiskies in the world.

This review will cover the latest of these cask strength bad boys: namely, Springbank’s 12-Year-Old Burgundy. As its title proclaims, the offering was matured for twelve years in casks that once aged burgundy wine.

Burgundy is a region in France that tends to grow dry red wines, such as gamay and pinot noir, as well as some whites. I’ve found Springbank whisky tends to work quite well with these types of casks. However, I was not all that impressed with the Longrow 14-Year-Old Burgundy, which was released a couple of years ago.

Several other 14-year-old Longrows have been absolutely stellar, such as the madeira wood: one of my all-time faves. In fact, fourteen years of age seems to be a magical number for Longrows, whereas Springbanks finish the job of aging themselves quite admirably in twelve.

The Curious Case of Springer Twelves

I don’t mind admitting that I’m a die-hard fan of Springbank’s 12-Year-Old cask strength releases, which come out once or twice a year, and tend to be combination of 70% sherry casks, and 30% bourbon casks. These days, I’m interested in trying the Batch 12. This one is rumored to be a bit gamey in the most delightful of ways.

People who taste the Batch 12 either tend to love the broth, or hate it. Why is that, you ask? Well, because Batch 12 offers a rare sensation that some critics have called umami, meaning it has a “strong meaty taste.” This likely comes from the use of slow-growing locally sourced autumnal barley, as opposed to faster growing strains that produce the most alcohol.

A few aficionados have even gone so far as to speculate that the Batch 12 was exposed to wet bung cloths on some of its casks, probably due to a leak in the ceiling of a dunnage warehouse. At any rate, such variations, when not excessive, and vatted sparingly with other less atypical casks, can make for a uniquely enjoyable dram. Therein lies the mystical element of serendipity.

Happy accidents can sometimes find their way into this or that batch of Springer Twelve, while the distillery manages to keep a reliably predictable profile. For me, the differences between batches are what keep me returning for bottle after bottle, year after year. Such variation harkens back to the old-fashioned way of making whisky that could produce unexpectedly marvelous results.

In other words, with less anal-retentive quality control, whisky in the “good ole days” had more of a chance to be really, really good once in a while, instead of just pretty good all of the time, as most well-respected whiskies are today. These “safe bets” are made in corporately owned distilleries with cutting edge equipment and state-of-the-art computer software to keep track of every last barrel in warehouses with high ceilings, concrete floors, and stacks of casks that vanish into the distance like the end of an Indiana Jones film.

Conversely, privately owned distilleries like Springbank use cranky old stills (If it ain’t broke, why fix it?), and store their casks in ancient dunnage warehouses with cramped ceilings, slate roofs, earthen floors, and thick stone walls. Such are the reasons why each and every batch of cask0strength Springer Twelve offers some delightfully idiosyncratic differences from other closely related kindred batches, while still maintaining a delightfully savory-yet-sweet characteristic that so many folks know and love.

At any rate, I’m especially impressed with the Springbank 12-Year-Old Burgundy. No, it’s not exactly a cask strength “batch,” per se . . . and yet, it is. Am I losing you?

Right, okay, let me explain: all Zen paradoxes aside, this one is a special limited twelve year-old cask strength release, as opposed to a typical limited edition 12 Year Old cask strength release. In other words, the Springbank 12-Year-Old Burgundy has a name, whereas all the rest don’t even have batch numbers on their labels. Instead they are identified (rather arcanely) by different ABV percentages. For example, the Batch 12 has an ABV of 54.1% and that’s how folks know what it is.

Springbank set aside some very special casks for its burgundy-colored box and label. What goes around, comes around. Springer fans from Moscow, Russia, to Moscow, Idaho, perched on the edge of their seats in front of their computers, and proceeded to buy out the first available shipments of the 12 Year Old Burgundy within hours of when bottles hit the virtual shelves. Physical stores with walk-in customers also sold out in record time.

C’est la vie. As with so many limited and rare Springbank releases, these bottles will probably be gone before the general public even knows about them, much less how good they are. That’s why it pays to be a member of Springbank Society (hint, hint). Members hear about these things months ahead of time, and they also enjoy special privileges when it comes to snagging rare bottles, although–alas alack–shipping out of the UK is a conundrum, at present. But, whatever. Shipping-shmipping. ‘Tis a minor setback for the die-hard Springer fan. All the more reason to visit Campbeltown and bring your prized bottles home with you afterwards! 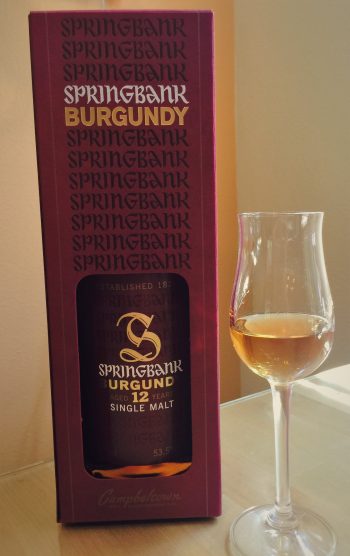 Nose: When first poured, the scent of the Springbank 12-Year-Old Burgundy reminds me of the last year’s limited release 12-Year-Old Port Pipe. But this relatively minor similarity fades as the whisky breathes, thankfully. (I’m sorry to say that I was not a big fan of the Port Pipe.)

I also catch tantalizing hints of golden raisin on the nose of this whisky, in addition to agave nectar, lingonberry, red clover floret, new leather, wet limestone, and the dungeonesque presence of dunnage warehouses (which I really enjoy in all of the 12-Year-Old Cask Strength Springers). Water brings out Nilla Wafers, while also heightening the wood presence, which is quite unusual for a whisky. If it wasn’t so damned good, I might call the counter-intuitive result “bass-ackwards.”

Palate: The flavor of the 12-Year-Old Burgundy differs dramatically from the 12-Year-Old Port Pipe. Oh. My. Gawd. This rather unassuming bottle, aside from its gold lettering, is a Babe Ruth-style home run. Now I know why a good friend of mine said the 12-Year-Old Burgundy is “f-ing” good as he was driving us to a whisky tasting in Northeast Portland last Tuesday evening. A polished banking type, he rarely ever drops the “f-bomb,” but he did not hesitate to do so when summing up this whisky.

I wholeheartedly agree with the sentiment. Without water, it is absolutely HUGE, and yet still immanently quaffable. Right off the bat, it exudes well-worn leather, cream-drizzled crepes, milk chocolate . .  . all with a buttery-rich mouthfeel.

In a handful of other reviews of the Burgundy, critics mention “herbs” rather vaguely when describing the palate. I tried my best to figure out which herbs, but I could not pin them down, aside from paprika that comes from oak resin in the casks. The rest of these so-called herbs bring to mind a few well known digestive bitter liqueurs with a menagerie of proprietary herbal combinations that are rarely divulged on a label, or a website–and for good reason. Drinking an ancient potion is supposed to be somewhat mysterious.

For those drinkers who do not relish tastes akin to an alcoholic bitter on the death, there is good news: in time, the influence tends to dissipate somewhat, leaving sweet flavors to reign supreme. Fifteen or twenty minutes in the glass is long enough. One of my favorite aspects of the 12-Year-Old Burgundy’s finish concerns a lip-smacking note of vanilla ice cream, which is followed by echoes of peppermint and American pralines.

I can only assume that, as the whisky in my bottle oxidizes after being opened for a few months, and the level goes down, some of the bitter notes will fade. In the meantime, I will embrace the bitter side of love at first taste, as I feel it does provide a welcome balance to “sweet nothings.”

Even at a whopping 53.5%, I prefer the Springbank 12-Year-Old Burgundy without water. Call me an Ugly American. I know, I know . . . drinking a cask strength whisky neat is enough to make Ralfy Mitchell cringe, over in his Manx bothy on the Isle of Man. Still, I think the fact that I enjoy this particular dram without water is a testament to its craftsmanship, and also to its delicate nature for a cask strength offering.

Lastly, it’s worth noting that a Burgundy influence is not prominent in the glass. I really do appreciate the fact that wine casks take the backseat gracefully here without a need to show off their grapiness. And this coming from a guy who absolutely loves the wine presence in Longrow Pinot 12-Year-Old, which is front and center.

Sometimes being a show-off isn’t such a bad thing. In the case of Springbank 12-Year-Old Burgundy,  however, I prefer my wine influence in the backseat of the elixir’s “vehicle,” so to speak. Chauffeur, pour me another round, and take your time driving . . . to a place called Campbeltown . . . where, even today, whisky-making has remained perfectly old-fashioned, like a Daimler Limousine DS420.