Upon receiving this bottle for review, I casually noticed it’s a sourced whiskey – distilled and perhaps even blended by a third party, and bottled by (or for) a more sales-based entity. In this case, all the bottle tells me is “Distilled in Tennessee, Bottled by Southwell Brands.”

Sometimes, excitingly special barrels from our favorite producers are used in such endeavors, and sometimes it’s less special stock from a giant warehouse in Indiana. On the negative side, there’s no appealing backstory, historical distillery tour, or tasting room you can visit. There’s no ‘grain-to-glass’ backstory or legend of so-and-so’s great-great grandfather. On the positive side, you may randomly find a riff on one of your favorite big-name whiskies lurking in one of these less-identifiable bottles of bourbon. Sampling sourced whiskies can be a true treasure hunt.

A little digging on Southland yielded the name ‘Pacific Edge,’ apparently the business behind contracting out this new brand. That also led me to an extremely hokey commercial for said brand, which yielded many laughs but again, little info. The video did indicate that this bourbon is made up of 84% corn, 8% barley, and 8% rye, and the bottle’s label tells me it was aged for 12 years. The commercial also tells me that the liquid comes from Bardstown, Kentucky, which is contrary to the label statement of Tennessee.

Other than the vague commercial narrated by an appropriately horsey-voiced man’s man, and some online liquor store tidbits, this whiskey may as well not exist. But it’s here in front of me now, so it must. 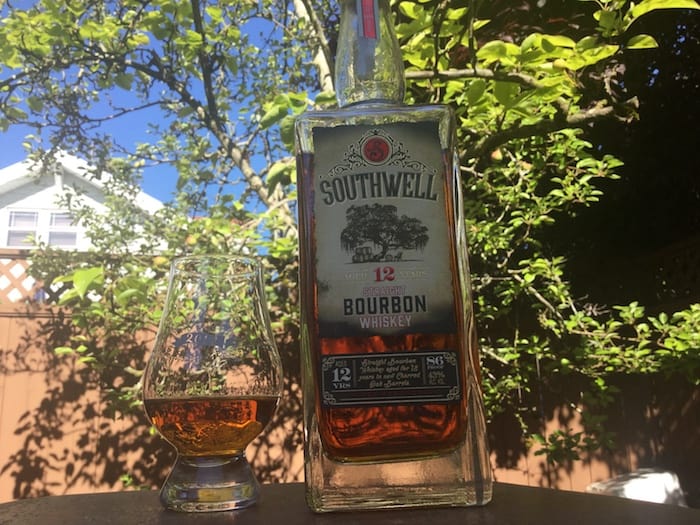 Appearance: This bourbon pours an inviting warm orange color with a slightly imperfect clarity. The viscosity and motion of the liquid seem appropriate. Free of particulate and haze.

Nose: First impressions bring to mind cherries and vanilla beans, with occasional wafts of rich butterscotch which are supplemented by the sharp spike of alcohol in the nose. There is a note of graham cracker as well, creating a bourbon with predominantly dessert-related aroma points. One of the only pieces of text I could find on this whiskey touts the excess of corn in the mash bill, which certainly translates in the smell as a simple source of sweetness.

There is also a strange lactic sharpness, most likely an excess of vanilla, but almost yogurt-like on some deeper inhales.

Palate: Holy butterscotch! Once this bourbon hits the tongue, the smells start to make sense. The first impression is of melted vanilla ice cream, both because of those flavor elements of vanilla and dairy, and that linger which is backed up by a viscosity and sweetness. It is one of the more easy-sipping bourbons I’ve encountered at the price range, mostly because it lacks the complexity found in liquid more balanced by astringency or wood. I am able to pick up some darker flavors as my palate acclimates.

That black cherry makes an appearance, as do a touch of mustiness and a small element of high-heat, banana-like esters. It tastes good, but in the same way that milkshakes and soda taste good. It’s a dessert.

While nothing about this bourbon will keep me coming back, it is perfectly acceptable as a mixer and has some really clean, admirable points. It simply lacks repeat or prolonged drinkability, mostly because of the sweetness and lack of balance with non-dessert flavors.

It's also a spendy one, and will probably not be the choice of savvy whiskey buyers in markets where more exciting and $10-$20 cheaper 12-years are available.