Editor’s Note: This whiskey was provided to us as a review sample by Western Spirits Beverage Company. This in no way, per our editorial policies, influenced the final outcome of this review.

“I would give no thought of what the world might say of me, if I could only transmit to posterity the reputation of an honest man.” -Sam Houston

Sam Houston Bourbon Whiskey is an American whiskey done in tribute to the life of the soldier and statesman who defeated General Santa Anna at the Battle of Jacinto, April 21, 1836. Houston was known as a man of principle who was brutally honest. He was the president of the Republic of Texas two different times, as well as later serving as a senator to the United States Senate.

This bourbon is brought to us by Western Spirits Beverage Company out of Bowling Green, Kentucky. Some of their other major bourbon offerings are the Lexington, Bird Dog and Calumet brands. This is the second release of Sam Houston 12-year-old Straight Bourbon Whiskey.

Curated by the team at Bardstown Bourbon Company the new batches of Sam Houston were “crafted from a rare, premium bourbon reserve” that was aged for 12 years in hand-chosen, American white oak barrels, charred at #4 level. It is said it was put together in very small batches of only three barrels at a time, with each bottle hand-labeled with specific aging notes for each batch and numbered.

This release is available in a select handful of states, including Texas, Tennessee, Kentucky, Illinois, New York, Colorado, Maryland, Virginia, and Washington DC. Made up of a mash bill of 74% corn, 18% rye, and 8% malted barley, and bottled at 98 proof, you can expect to pay about $100 a bottle for this bourbon whiskey. 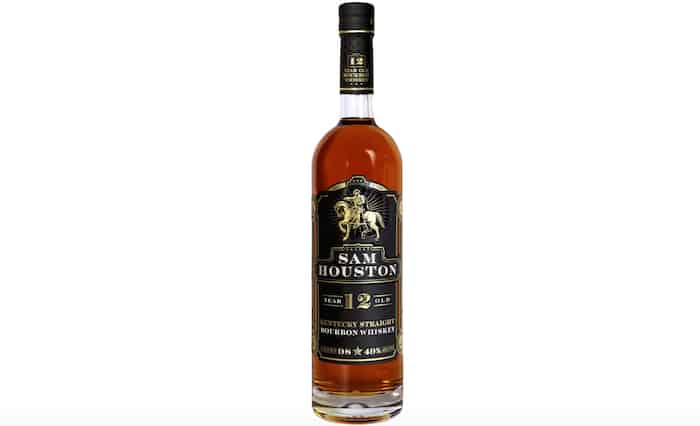 Appearance: This bourbon whiskey has a nice honey color, with a touch of redness to it.

Nose: Due to the #4 char level, this spirit has a great smoky oak smell to it. Underneath the initial smokiness, is a light sent of apple and grain.

Palate: This is a nice and smooth spirit, with an initial lovely smoky oak flavor.  The oak flavor is followed by a hint of orange peel, a hint of apple and cherry, with a touch of molasses to finish it off.

For a 98 proof spirit, Sam Houston Kentucky Straight Bourbon Whiskey is a very smooth bourbon whiskey. With such a great oak flavor, and only a light heat, this is a very enjoyable bourbon whiskey that would be a wonderful evening drink by the fire, either neat or on the rocks.